The Allstate Corporation (ALL - Free Report) recently disclosed catastrophe loss estimates of $436 million or an after-tax amount of $344 million for the month of May 2022.

Catastrophe losses last month primarily stemmed from 14 events related to the occurrence of wind and hail throughout Texas, the Midwest and Canada. These events are expected to cost Allstate $423 million. The events coupled with unfavorable reserve reestimates of prior period are behind catastrophe loss estimates during last month.

Consequently, the continued incidence of catastrophe losses leads to elevated claim costs for any insurer, which in turn, hampers underwriting results and strains margin expansion. As a counter measure, insurers resort to rate hikes to cope with increasing expenses that they have to handle amid the occurrence of such unpredictable events. Rate increases are likely to drive the premiums of a P&C insurer, which are one of the most significant contributors to its revenues.

To handle the continuing inflationary consequences on auto insurance severities, Allstate undertook rate hikes in the month of May. Auto rate increases of $180 million were enforced last month by Allstate brand. The same on a quarter-to-date basis amounted to $343 million.

Frequent rate hikes in 2022 seem to be a prudent move on the part of Allstate, considering the fact that an active Atlantic hurricane season is likely to occur this year as well. While the Climate Prediction Center of National Oceanic and Atmospheric Administration (NOAA) have forecast an above-average Atlantic hurricane season in 2022, the Colorado State University’s (CSU) researchers predict an active season with 19 named stores (nine can become hurricanes and four might become major hurricanes) likely to occur in this year’s season.

Though such estimates might raise concern for Allstate’s investors, the P&C insurer has a catastrophe management strategy and reinsurance programs in place to tackle significant headwinds stemming from catastrophe losses.

Shares of Allstate have rallied 6.4% in the past six months against the industry’s decline of 6.8%. 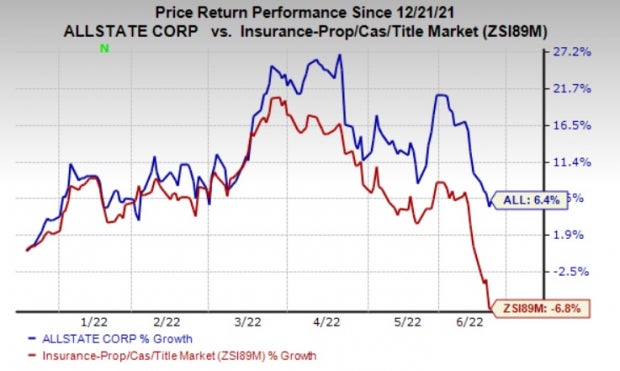 ALL currently has a Zacks Rank #5 (Strong Sell).

The bottom line of Chubb outpaced earnings estimates in each of the trailing four quarters, the average surprise being 13.45%. The Zacks Consensus Estimate for Chubb’s 2022 earnings suggests an improvement of 19.1% from the year-ago reported figure, while the same for revenues suggests growth of 3.9%. The consensus mark for CB’s 2022 earnings has moved north by 0.3% in the past 30 days.

Kinsale Capital’s earnings surpassed estimates in each of the trailing four quarters, the average surprise being 26.43%. The Zacks Consensus Estimate for Kinsale Capital’s 2022 earnings indicates a rise of 18.3% year over year, while the same for revenues suggests an improvement of 24.8%. The consensus mark for KNSL’s 2022 earnings has moved north by 2.6% in the past 60 days.

Shares of RLI and Chubb have rallied 0.2% and 1.1%, respectively, in the past six months. Meanwhile, Kinsale Capital’s stock has declined 4.% in the same period.

The Allstate Corporation (ALL) - research report >>

Seagen (SGEN) Stock Up on Rumors of Acquisition by Merck