1. Tesla yet again raised prices for all its car models in the United States last week. The EV leader has increased the prices of its luxury EVs multiple times this year, including a significant hike twice in the same week of March. It also issued a comparatively smaller increase on certain Model 3s in April. In the face of the ongoing global supply-chain problems and escalating raw material costs, Tesla again hiked prices across its lineup. Here’s a summary of the latest price increases.

2. General Motors announced a price hike for all new reservations of its already expensive GMC Hummer EV pickup or SUV placed on or after Jun 18. Prices will see an increase of $6,250 to the base manufacturer's suggested retail price (MSRP). However, the company noted that all existing Hummer EV reservations, regardless of trim or model, placed before Jun 18 will see no price increase.

As for the new reservations placed after Jun 18, the automaker says that final pricing is determined based on selected options and packages, "as well as the price the customer and dealership agree upon at the time of vehicle ordering." The 3X trim level has a starting MSRP of $99,995, but the base price for new reservations placed after Jun 18 will be raised to $106,245. GM, however, is of the view that given the Hummer EV's clientele and initial high price point, the latest hike will likely not be an issue for the vehicle's affluent customers. More and more automakers are being forced to hike prices on soaring costs of commodity parts, technology, raw materials and logistics.

3. Blink inked a $200 million cash-and-stock deal to acquire SemaConnect. Maryland-based SemaConnect is one of the leading providers of EV charging infrastructure solutions in North America. SemaConnect CEO Mahi Reddy is set to join Blink's board of directors after the closure of the acquisition, subject to the fulfillment of customary closing conditions.

This transformative deal would enable Blink to gain full control over its supply chain. It would become the only EV charging firm providing 100% vertical integration, ranging from research and development, hardware design and manufacturing to EV charger ownership and operations. The buyout is expected to add close to 13,000 EV chargers, 3,800 site host locations and more than 150,000 registered EV driver members to Blink's existing network.  The acquisition of SemaConnect will also speed up Blink’s expansion into markets like California.

4. Electric Last Mile plans to file for bankruptcy just a year after going public. It is the first among a line of special purpose acquisition company (SPAC) electric vehicle (EV) players to run into trouble and go out of business.Electric Last Mile Solutions went public in June 2021 through a merger valued at $1.4 billion with Forum Merger III. However, it has been under the scrutiny of the U.S. Securities and Exchange Commission (“SEC”) since March. Last week, ELMS announced its intention to liquidate through a Chapter 7 bankruptcy process.

Electric Last Mile stated that it has faced a number of obstacles, and it became difficult for it to steer clear of those within a short span. The bankruptcy announcement comes three weeks after the Electric Last Mile had flagged that it was in danger of running out of cash. Some of the company’s top brass resigned in February when it came to light that they had purchased equity in the company at substantial discounts before its merger. The SEC investigation that followed thereafter sent its shares plummeting below $1. The company was forced to lay off nearly a quarter of its workforce. Last month, the firm disclosed it ran the risk of being delisted over delays in filing its 2021 annual and first-quarter 2022 financial reports.

3. NIO launched its much-awaited ES7 SUV, the deliveries of which are expected to commence on Aug 28. The newest SUV, available for pre-order in China on the company’s app, will be equipped with NIO’s latest EV technology. The ES7 has a range of premium features besides a 75kWh Standard Range Battery and 150 kWh Ultralong Range Battery. It will identify as NIO’s fastest SUV to date with one of the first certified passenger vehicles in China with the ability to tow a caravan or a trailer. Not only can the vehicle supply power to towed equipment but also support vehicle-to-load discharging and “Camping Mode” to power outside devices. 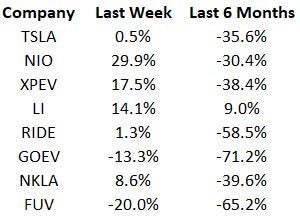