Valued at $240 million, the contract is projected to be completed by December 2024. Per the terms, Ingalls Shipbuilding will provide long-lead-time material and perform detailed design and construction of LPD 32.

This contract modification includes options, which, if exercised, would bring its cumulative value  to $1.56 billion. On exercising these options, work for this contract will continue through March 2031.

A major portion of the work related to this deal will be carried out in Pascagoula, MS.

LPDs, also known as amphibious transport dock ships, are designed to deliver equipment and supplies ashore to the U.S. Navy, using air cushion or conventional landing craft and amphibious assault vehicles. These, in turn, are supported by helicopters or vertical takeoff and landing aircraft such as the MV-22 Osprey.

Considering such developments, the latest contract involving the construction of yet another LPD indicates the solid demand that Huntington Ingalls enjoys in the naval warfare market.

Per the latest report by Mordor Intelligence, the global naval vessels market’s worth is expected to increase $253 billion during the 2022-2031 period at a CAGR of 12.8%. This, in turn, should boost the growth of various assault ships, including LPDs. Huntington Ingalls, being a major shipbuilding giant, is likely to benefit.

General Dynamics has been serving the U.S. Navy by constructing and delivering next-generation combat ships for decades. The company is a co-contractor with Huntington Ingalls for the construction of many assault ships.

General Dynamics boasts a long-term earnings growth rate of 9.8%. The Zacks Consensus Estimate for 2022 sales implies an improvement of 2.7% from the 2021 reported figure.

Bae Systems designs and manufactures naval ships and submarines, along with their state-of-the-art combat systems and equipment. It also offers an array of associated services, including training solutions, maintenance and modernization programs to support ships and equipment in service around the world.

BAE Systems boasts a long-term earnings growth rate of 7.2%.  The Zacks Consensus Estimate for 2022 sales indicates an improvement of 25.5% from the 2021 reported figure.

Mitsubishi Heavy Industries delivered an earnings surprise of 7.24% in the last reported quarter. The Zacks Consensus Estimate for fiscal 2023 sales suggests an improvement of 5% from the 2021 reported figure.

In a year’s time, shares of Huntington Ingalls have lost 5.8% compared with the industry’s 44.5% decline. 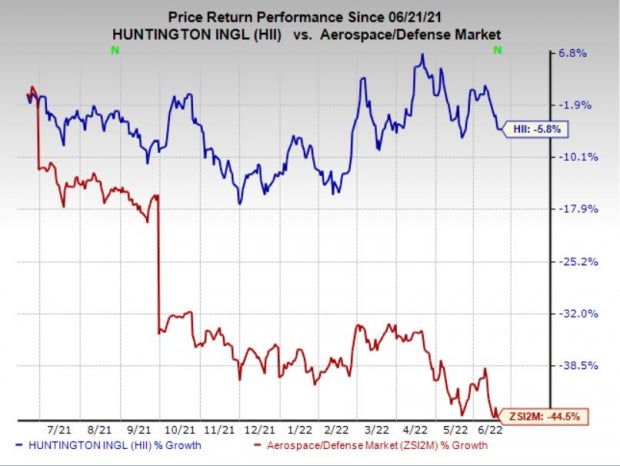