The expansion of the North Field is estimated to cost $30 billion. It involves the construction of four LNG mega trains, with a combined capacity of 32 million tons per annum (Mtpa). The project is expected to raise Qatar’s LNG production capacity from 77 Mtpa to 110 Mtpa. It is likely to commence production in the fourth quarter of 2025.

Eni has been selected by Qatar Energy for the North Field expansion project to improve Qatar’s position as a major LNG exporter globally. Eni’s portion of the North Field East project is the same as ConocoPhillips.

The agreement aligns well with Eni’s ambition to diversify into cleaner and more reliable energy sources. The move expands Eni’s presence in the Middle East and gains access to a world-leading LNG producer. Eni’s collaboration with Qatar Energy on the North Field expansion project will contribute to the security of gas supplies.

TotalEnergies’ selection in this prestigious project was primarily due to its presence in the entire LNG value chain, starting from production, liquefaction, regasification and transport. TotalEnergies’ large fleet of LNG tankers and reserved capacity in several regasification terminals make it a perfect partner for the project.

TTE is making investments to increase the production of LNG across the globe and develop the infrastructure needed for LNG production and transport. TotalEnergies has set a LNG sales target of 50 million metric tons by 2025. The partnership in the North Field East expansion project will contribute toward its LNG sales target.

Shares of COP have outperformed the industry in the past six months. The stock has gained 33.9% compared with the industry’s 31.2% growth. 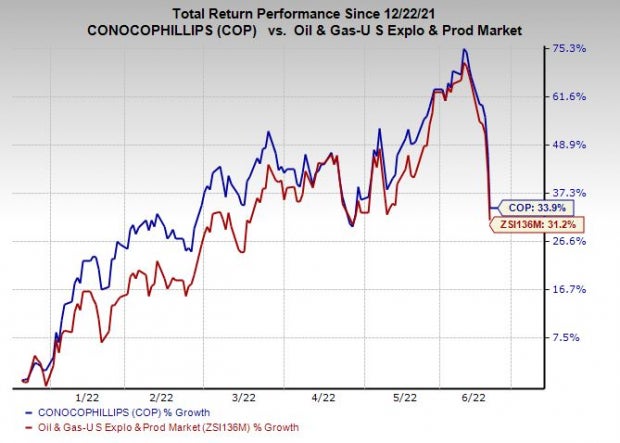 Investors interested in the energy sector might look at the following company that presently sports a Zacks Rank #1 (Strong Buy). You can see the complete list of today's Zacks #1 Rank stocks here.

Imperial Oil Limited (IMO - Free Report) is one of the largest integrated oil companies of Canada. IMO’s debt-to-capitalization of 18.9% is quite conservative versus 32.1% for the sub-industry it belongs to. Imperial Oil has ample liquidity, with cash and cash equivalents of $1.7 billion.

Imperial Oil remains strongly committed to returning money to investors via dividends. The company’s board of directors approved a hike in quarterly dividend payment. The new payout of 34 Canadian cents is 26% above the prior dividend. Further, Imperial Oil revised its existing share repurchase policy to buy up to 4% of outstanding common shares.

3 Utilities Worth Betting On Despite Ongoing Rate Increases