However, despite the rate hikes in March, May and mid-June, along with expectations of more this year, relatively lower interest rates might hamper margin growth to some extent. Elevated expenses will likely hurt profits.

Analysts also do not seem optimistic regarding the company’s earnings growth potential. The Zacks Consensus Estimate for HWC’s current-year earnings has been revised marginally lower over the past 30 days. Thus, the company currently carries a Zacks Rank #3 (Hold).

Over the past year, shares of Hancock Whitney have lost 3.8% compared with the 10.5% decline recorded by the industry. 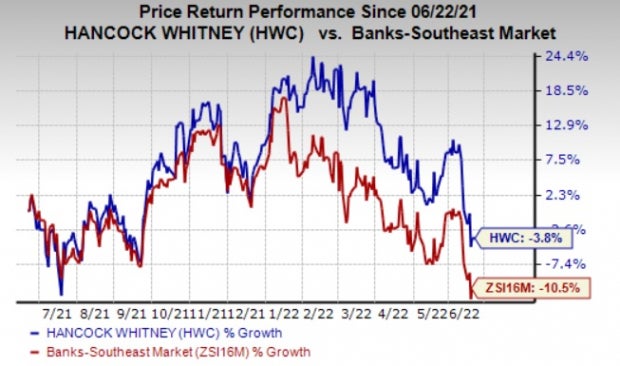 Looking at its fundamentals, while revenues (on a tax-equivalent basis) declined in first-quarter 2022, it witnessed a compound annual growth rate (CAGR) of 6.9% over the last six years (2016-2021). Total loans saw a CAGR of 4.8% over the same time frame. Robust economic growth and a gradual rise in loan demand will likely continue to support the top line.

For 2022, management expects total core loans (excluding Paycheck Protection Program loans) to rise 6-8% year over year, with quarterly performance affected by seasonality. Total deposits are expected to be flat or slightly down from the 2021 reported level.

Apart from organic expansion efforts, HWC has undertaken acquisitions in the past, which continue to support its financials. Given the strong balance sheet position, the company is well-poised to further grow through inorganic means to diversify revenues and improve market share.

The company’s strategic investments in growth and new markets are expected to further bolster its top line and help achieve an efficiency ratio of 55% by the end of fourth-quarter 2022.

As of Mar 31, 2022, Hancock Whitney had total debt of $1.86 billion (87.1% of which consisted of short-term borrowings). The company maintains investment grade ratings of BBB/Baa3 and a stable outlook from Standard and Poor, and Moody’s Investors Service, respectively. Thus, despite having a huge debt balance, the company will likely be able to meet its debt obligations in the near term, even if the economic situation worsens.

However, while HWC’s expenses declined in first-quarter 2022, the same witnessed a five-year (2017-2021) CAGR of 3.9%. Although the acquisition of MidSouth Bancorp has resulted in significant cost savings, the company’s continued efforts to expand inorganically and upgrade technology are expected to keep costs elevated in the near term.

Despite the recent rate hikes, along with expectations of further rate increases in 2022, relatively lower rates might keep NIM under pressure for some time in the near term.

Hancock Whitney has significant exposure to residential mortgage, construction and land development, as well as commercial real estate loans. Despite some improvement in the housing sector, the company’s exposure to these risky loans remains concerning. If there is any deterioration in real estate prices, the company’s financials will be hurt.

The consensus estimate for S&T Bancorp’s current-year earnings has been revised 13.7% upward over the past 60 days. Over the past year, STBA’s share price has decreased 13.9%.

Arrow Financial’s current-year earnings estimates have been revised 3.2% upward over the past 60 days. AROW’s shares have lost 10.5% over the past year.