Management at Canadian National (CNI - Free Report) confirmed that operations at the railroad operator are continuing as usual. Incidentally, CNI’s signal and communication workers are on strike following failed negotiations on issues primarily related to wages and other benefits.

We note that 750 signal and communications employees of Canadian National are represented by the International Brotherhood of Electrical Workers (IBEW). On Jun 15, the union gave a 72-hour strike notice to CNI.

Per a Reuters report, IBEW turned down CNI leadership’s 10% wage-hike proposal for the striking employees. The increment was requested for three years.

Despite the strike materializing, the movement of products like crops, oil, potash, coal and other manufactured remains normal per CNI. Canadian National fellback on its operational contingency plan to safely conduct its operations during the current emergency. However, CNI requested the workers’ union to cease its work stoppage. CNI offered to resolve the points of difference through binding arbitration. 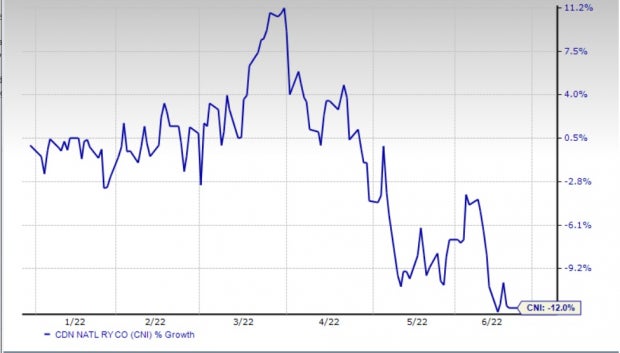 Even though the current walkout was yet to hamper operations at Canadian National, the same cannot be ruled out if the deadlock persists for long. In such a scenario, CNI’s share price might further depreciate. To avoid such an eventuality, it is desirable that the current strike at CNI ends soon. Watch this space for further updates on the issue.

Higher volumes owing to a better freight market environment bolster Forward Air’s top line. Thanks to growth in its operations, FWRD is committed to rewarding its shareholders with dividends and share buybacks. In February, FWRD’s board approved a 14% hike in its quarterly dividend payment, taking the total to 24 cents per share.

Ryder has a trailing-four quarter surprise of 48.2%, on average, with its earnings having surpassed the Zacks Consensus Estimate in all the last four quarters. R is benefiting from improving economic and freight conditions in the United States.

In first-quarter 2022, the top line improved 41.8% owing to favorable truckload pricing for customers and handsome profits in ocean freight. CHRW currently carries a Zacks Rank of 2.