In the latest development pertaining to the takeover of the Miramar, FL-based Spirit Airlines (SAVE - Free Report) , JetBlue Airways (JBLU - Free Report) raised its offer to purchase SAVE. The move, made just ahead of Spirit’s shareholder vote on Jun 30, is aimed at winning this buyout race from rival bidder Frontier Group Holdings (ULCC - Free Report) .

Meanwhile, Ryanair Holdings’ (RYAAY - Free Report) labor problems deepened with its cabin crew planning to go on strike shortly in certain European countries. On the other hand, U.S. based low-cost carrier, Southwest Airlines (LUV - Free Report) raised its view for June quarter’s load factor (% of seats filled by passengers) driven by upbeat air-travel demand. Again, owing to increased passenger traffic, Allegiant Travel’s (ALGT - Free Report) load factor of 86.6% recorded in May was the highest in a month since the onset of the pandemic. Load factor for June is estimated to be roughly 90%

2. Per a Reuters report, unions representing Ryanair’s cabin crew are planning to go on strike in Belgium and Portugal from Jun 24 to Jun 26, in their quest for improved pay and working conditions. In France, they plan a strike from Jun 25 to Jun 26 and in Italy on Jun 25. Unions are also planning to go on strike in Spain on Jun 24, Jun 25, Jun 26, Jun 30, and Jul 1-Jul 2. The strikes, on materialization, may act as a spoiler as far as its plans of generating high load factor readings in the summer months are concerned.  That load factor is expected to be high in summer was discussed in the previous week’s write-up.

4. In May, Allegiant carried 40% more passengers, system-wide, than a year ago. Available seat miles (a measure of capacity) increased 17.1% year over year for the total system as ALGT expands capacity to meet increased demand. In sync with ALGT’s capacity-expansion efforts, capacity for scheduled operations increased 15.5% in May 2022 from the May 2019 actuals (pre-coronavirus era). Due to the increase in oil price, ALGT now expects the average fuel price per gallon for the June quarter to be $4.30 (earlier estimate was $4). Due to increased flight cancellations as a result of labor crunch and a spike in COVID-19 cases, ALGT expects second-quarter 2022 operating revenues to increase roughly 28% from the second-quarter 2019 actuals, which matches the lowest end of the previous estimate of an increase in the 28-32% range. 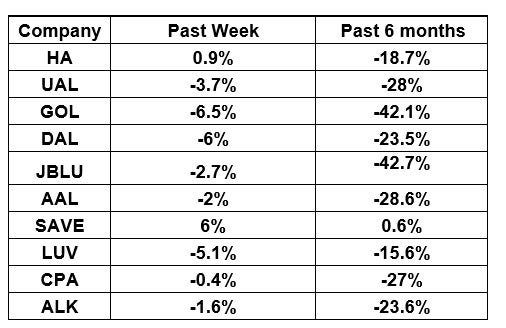 Air-travel in the United States is being currently hampered due to the labor-crunch induced flight cancellations. With the labor unrest continuing, further updates on the issue are expected in the coming days.