Here's Why Investor Should Retain Jack in the Box (JACK) Stock

Jack in the Box Inc. (JACK - Free Report) benefits from the Del Taco acquisition, robust delivery channel, menu innovation and other sales-building efforts. The company’s shares have declined 29.3% in the past six months compared with the industry’s fall of 24.6%. Nevertheless, JACK has an impressive long-term earnings growth rate of 17%. However, dismal franchised comps and high costs are a concern. Let’s delve deeper.

On Mar 8, 2022, the company completed its previously-announced acquisition of Del Taco Restaurants for approximately $585 million. The move is in sync with its strategy of expanding the customer base. Del Taco, which has nearly 600 restaurants, serves more than three million guests every week. Post the deal, the companies have more than 2,800 restaurants in 25 states with similar guest profiles, menu offerings and company cultures. It is worth mentioning that 99% of the Del Taco restaurants have a drive-thru, which helps it achieve robust off-premise sales. The acquisition will enable Jack in the Box to tap the robust Mexican QSR category, where Del Taco is a major brand with a track record of steady performance.

The company believes that Del Taco’s addition will pave the path for improvement in restaurant margins, store-level profitability and strengthening of capital structure but will also help mitigate macroeconomic headwinds. Jack in the Box anticipates the deal to be accretive to earnings per share (excluding transaction expenses) in the mid-single-digit in one year. In the second year, the company expects significant earnings accretion once full synergies are realized. With this integration, the company anticipates realizing run-rate cost synergies of roughly $15 million by 2023-end.

Jack in the Box is focusing on delivery channels, which is a growing area for the industry. Given the high demand for this service, the company has undertaken third-party delivery channels to bolster transactions and sales. The company partnered with DoorDash, Postmates, Grubhub and Uber Eats. It is expanding its mobile application in a few markets that support order-ahead functionality and payment. The company continues to integrate its POS systems with third-party vendors to enhance restaurant operations. In second-quarter fiscal 2022, the company’s more than 10% of overall sales came from digital sales.

The company is also benefiting from menu innovation. Jack in the Box continues to focus on driving operating excellence across its existing store base by building brand loyalty. Given the menu diversity, price points and positive customer feedback, the company remains flexible and resilient against changing customer behavior. 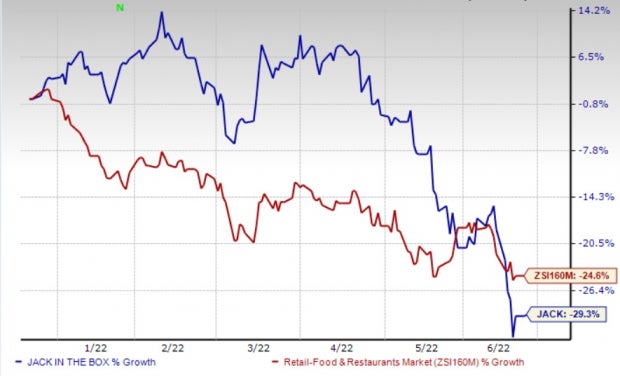 During the fiscal second quarter, same-store sales at franchised stores fell 1.1% year over year against 21.3% growth reported in the prior-year quarter. System-wide same-store sales dropped 0.8% year over year against a 20.6% gain reported in the year-ago quarter. The downside was primarily due to staffing challenges, Omicron-induced headwinds (during final weeks) and lapping of stimulus benefits from the prior-year period.

High costs have hurt the company. During the fiscal second quarter, restaurant-level adjusted margin came in at 15% compared with 25.9% reported in the prior-year quarter. The downside was due to a rise in food and packaging costs, wage inflation of 14.2% and higher utilities and maintenance and repair costs. Food and packaging costs (as a percentage of company restaurant sales) rose 320 bps year over year to 31%. Commodity costs in the quarter increased 16.4% year over year. The upside was due to a rise in beef, pork, sauces and oil prices. The company anticipates operating margin pressures on account of labor and supply chain challenges to persist for the remainder of fiscal 2022.

Jack in the Box carries a Zacks Rank #3 (Hold). You can see the complete list of today’s Zacks #1 Rank (Strong Buy) stocks here.

MarineMax sports a Zacks Rank #1. The company has a trailing four-quarter earnings surprise of 32.8%, on average. Shares of the company have declined 24.5% in the past year.

The Zacks Consensus Estimate for MarineMax’s 2022 sales and EPS suggests growth of 16% and 21.5%, respectively, from the year-ago period’s levels.

BBQ Holdings carries a Zacks Rank #2 (Buy). BBQ Holdings has a long-term earnings growth of 14%. Shares of the company have decreased 35.6% in the past year.

The Zacks Consensus Estimate for BBQ Holdings’ 2022 sales and EPS suggests growth of 46.1% and 67.6%, respectively, from the year-ago period’s levels.

Arcos Dorados carries a Zacks Rank #2. ARCO has a long-term earnings growth of 34.4%. Shares of the company have increased 14.5% in the past year.

The Zacks Consensus Estimate for Arcos Dorados’ 2022 sales and EPS suggests growth of 16.6% and 83.3%, respectively, from the year-ago period’s levels.