Rio Tinto plc (RIO - Free Report) announced the official opening of its Gudai Darri mine in the Pilbara region, Western Australia. This is a milestone for the company as well as the industry, considering the level of deployment of technology and innovation implemented at the mine to enhance productivity and improve safety.

RIO announced on Jun 14 that it delivered the first ore from the mine, marking the delivery of its first greenfield mine in more than a decade. With an expected life of more than 40 years and an annual capacity of 43 million tons, the mine is expected to boost the output of Pilbara Blend, the company’s flagship product.

The mine’s commissioning and ramp-up are expected to increase Rio Tinto’s iron ore production volumes and improve the product mix from Pilbara in the second half of this year. RIO maintains its shipment guidance for 2022 at 320-335 million tons (100% basis), considering the risks associated with the ramp-up of the new mines, weather and management of cultural heritage. The capital costs for the mine are estimated to be $3.1 billion.

Rio Tinto broke ground on the mine in April 2019. Since then, it has generated more than 3,000 jobs during the construction and design phase. To optimize mine safety and drive productivity, and in sync with its goal to make Gudai-Darri its most technologically advanced mine, RIO has implemented an unprecedented level of technology, most of which are industry-leading. These include autonomous trucks, trains and drills, as well as the world’s first autonomous water trucks. Even the laboratory is fully operated, with robotics being used for ore sampling as well as for distribution of parts in the new workshop.

Rio Tinto’s AutoHaul was the world’s first fully autonomous long-distance, heavy-haul rail network that was fully operational in June 2019. The autonomous train is monitored remotely by operators from Perth. Rio Tinto collaborated with Caterpillar Inc. (CAT - Free Report) to advance the development of zero-emission autonomous haul trucks. Once the development is complete, the world’s first operational deployment of Caterpillar 793 zero-emission autonomous haul trucks is expected to be at Gudai-Darri.

In another first, Rio Tinto deployed Caterpillar’s fully autonomous water truck at the mine. Water spraying is a vital part of mining operations and the new technology is expected to enhance productivity by enabling digital tracking of water consumption, while cutting down water wastage.

To support Rio Tinto’s carbon emission reduction targets, Gudai-Darri will be powered by a 34-megawatt solar farm, which will supply about a third of the mine’s electricity demand once construction is complete in August. Combined with a new lithium-ion battery energy storage system in Tom Price, the solar plant will help cut down carbon dioxide emissions by about 90,000 tons in a year.

With the help of technology and automation, miners are bringing radical changes to mining operations to increase productivity, reduce costs and improve frontline safety. The efforts will help the industry meet its sustainability target by cutting down on carbon emissions, which is the need of the hour, considering the severity of climate change. 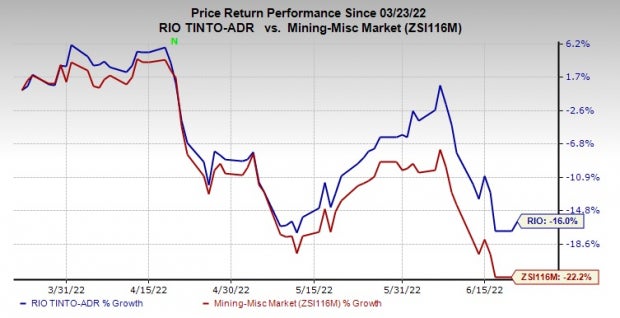 In the past three months, shares of Rio Tinto have fallen 16% compared with the industry’s decline of 22.2%.

Kronos has a projected earnings growth rate of 110% for the current year. The Zacks Consensus Estimate for KRO's current-year earnings has been revised 61% upward in the past 60 days.

Kronos has a trailing four-quarter earnings surprise of roughly 24%, on average. KRO has gained around 17% over the past three months.

Daqo New Energy has a projected earnings growth rate of 130% for the current year. The Zacks Consensus Estimate for DQ’s current-year earnings has moved up 21% in the past 60 days.

Daqo New Energy has a trailing four-quarter earnings surprise of 2.16%, on average. DQ has gained 47% over the past three months.

Flowserve (FLS) Down 30% in a Year: What's Hurting the Stock?