The latest tie-up, resulting in the growing adoption of Veeva Systems’ applications, is expected to provide a significant boost to the Veeva Commercial Cloud product line of its Life Sciences segment.

Significance of the Adoption

Per ANI Pharmaceuticals’ management, the company needs to be agile, data-driven and efficient to serve rare disease patients having high unmet medical needs. The tie-up with Veeva Systems will likely advance its launch readiness and supply new sales, medical and marketing teams with the required digital tools.

Veeva Systems’ management believes ANI Pharmaceuticals currently has the digital foundation that supports its patient-centric approach to commercialization. This is expected to ultimately leverage data to uncover key patient groups as well as their care providers.

Per a report by Marketsandresearch.biz, the global clinical data management system market was estimated to be $1574.8 million in 2021 and is projected to reach $4294.1 million by 2028 at a CAGR of 15.4%. Factors like a surge in clinical trials, a flourishing healthcare industry, and increasing research collaborations and partnerships are expected to drive the market.

Given the market potential, growing adoption of Veeva Systems’ applications is expected to strengthen its position in the global cloud application space.

This month, Veeva Systems made an announcement about Veeva Vault Study Training — a new application that combines research sites, clinical research organizations and sponsors into a single platform for end-to-end clinical study training.

Also, this month, Veeva Systems announced solid first-quarter fiscal 2023 results, wherein both of its segments performed impressively. The company continued to benefit from its flagship Vault platform and saw continued strength in its Veeva Commercial Cloud. 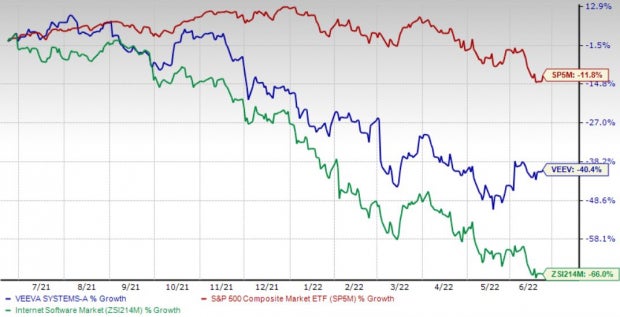 AMN Healthcare, sporting a Zacks Rank #1 (Strong Buy) at present, has an estimated long-term growth rate of 1.1%. AMN’s earnings surpassed the Zacks Consensus Estimate in all the trailing four quarters, the average beat being 15.6%.

AMN Healthcare has gained 7.6% against the industry’s 54.2% fall in the past year.

Omnicell, carrying a Zacks Rank #2 (Buy) at present, has an estimated long-term growth rate of 20%. OMCL’s earnings surpassed estimates in three of the trailing four quarters and missed the same in the other, the average beat being 13.4%.