Value investors are basically those who buy stocks at a bargain and then hold them for a really long period of time. Since the stocks are bought cheap, value investors stand to make big gains over time, as the market moves toward supply-demand equilibrium.

Generally, stocks trade below their intrinsic value for a number of reasons, mostly to do with negative investor perception about the concerned industry or stock, often by unduly discounting their growth potential.

This is very easy to do when there are significant market uncertainties. At the present moment for instance, nobody knows when inflation will come under control. Nor do we know whether it will be the result of the supply chain normalizing, or oil prices dropping off sharply, or a cooling of the housing market, or overall demand-kill as a result of the Fed’s monetary policy. We don’t even know if all of these things need to happen, or to what extent they need to happen before we’re out of the current predicament.

This makes investors jittery, and many pull out of the market in favor of storing cash or putting their money into safe-haven investments like gold. But if you wait out the panic before wading in, you could be in for some big gains. Which is exactly the reason that a bear market is a value investor’s dream. Because in such a market, it is much easier to find stocks that do not reflect their intrinsic value.

Today, I’ve picked some large-cap stocks with good growth potential that are trading below multi-year averages. Some near-term growth is also in the cards for most of them, going by analysts’ estimate revisions trend.

Broadcom’s earnings estimates are also on the rise. The Zacks Consensus Estimate for fiscal year 2022 is up 3.6% in the last 30 days. The 2023 estimate is up 5.1%. Analysts currently expect the company to grow 15.6% over the next five years.

The stock trades at 13.74X earnings (P/E), which is below the 5-year median value of 15.92X. Therefore, the current valuation is a multi-year low. It surely is an opening for Investors looking to buy low.

Next in line is Chubb Limited (CB - Free Report) . Analysts appear optimistic about this #2 ranked stock as well. They currently expect its revenue to grow 3.9% this fiscal year (ending December) followed by 8.8% growth next year. Earnings are expected to grow 19.1% and 10.8%, respectively, in the two years.

Near-term expectations on the stock are also positive. Analysts have raised their estimates for the two years by 4 cents and 3 cents, respectively. Over the next five years, earnings are expected to grow 10.0%. The shares trade at 12.05X earnings, below the 13.59X average in the last five years. Which is also an opportunity to buy low.

The third pick is one that I’ve also recommended recently. It remains attractive on multiple counts today. #2 ranked QUALCOMM Inc. (QCOM - Free Report) is expected to see revenue growth of 33.3% in the year ending in September followed by 9.0% growth next year.

Finally, we have Zacks #3 (Hold) ranked Costco Wholesale Corp. (COST - Free Report) . While analysts have taken down its estimates for the current fiscal year (ending August) by 5 cents, they’ve raised the 2023 estimates by 6 cents. Overall, they expect revenue and earnings growth of 14.5% and 16.9%, respectively this year with a respective 8.6% and 10.1% growth in 2023.

Over the next five years, Costco is expected to grow 9.2%. While a 32.8X multiple to earnings can appear high, it is still below its five-year average of 33.3X. Additionally, discount stores generally do well in down markets, so the stock is worth keeping an eye on. 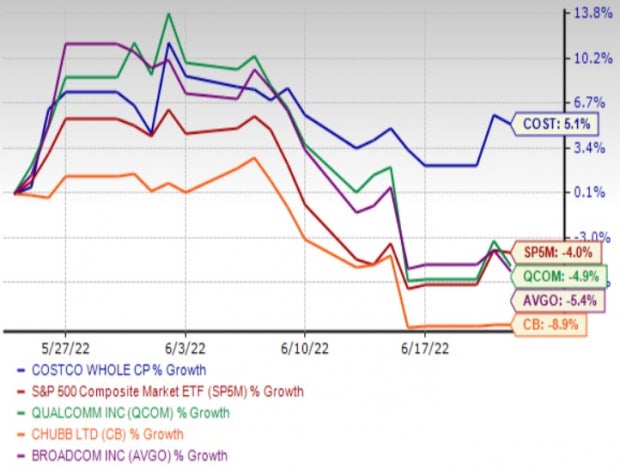