Valued at $37.8 million, the contract is expected to be completed by June 2025. Per the terms, Lockheed will provide for modifications for final country-unique configuration requirements for 24 MH-60R aircraft. Lockheed will also procure production spares, flight test assets, and goods and service tax recovery.

The contract will serve the government of India. The majority of the work related to this deal will be carried out in Owego, NY.

The MH-60R Seahawk helicopter is the world’s most advanced maritime helicopter designed to operate from frigates, destroyers, cruisers, and aircraft carriers. It is equipped for a range of missions, including anti-submarine warfare, anti-surface warfare, search-and-rescue, naval gunfire support, surveillance, logistics support, personnel transfer, and vertical replenishment.

Currently, it is operational and deployed with the U.S. Navy as the primary anti-submarine warfare and anti-surface weapon system for Open Ocean and littoral zones.

The United States, which is the largest exporter of military weaponries worldwide, is also strengthening military resources. This is quite evident from the fiscal 2023 budget proposal worth $773 billion put forward by the Biden administration for the Department of Defense, with $56.5 billion planned investments in combat aircraft. Impressively, the defense budget request reflects a 4.1% increase from the fiscal 2022 enacted amount.

Since its inception, Northrop Grumman has been a pioneer in the development of manned aircraft for combat. Northrop Grumman also has a tradition of providing technological leadership in all aspects of military aviation and aircraft, such as manned, unmanned, targeting, surveillance, and aircraft self-protection systems. It also enables warfighters to accomplish missions under any conditions.

NOC stock boasts a long-term earnings growth rate of 6.1%. The Zacks Consensus Estimate for 2022 sales implies growth of 2.6% from the 2021 reported figure.

BA stock boasts a long-term earnings growth rate of 4%. The Zacks Consensus Estimate for 2022 sales implies growth of 21.8% from the 2021 reported figure.

TXT stock boasts a long-term earnings growth rate of 12.7%. The Zacks Consensus Estimate for 2022 sales implies growth of 8.2% from the 2021 reported figure.

In the past year, shares of Lockheed have gained 10.1% against the industry’s 42.5% decline. 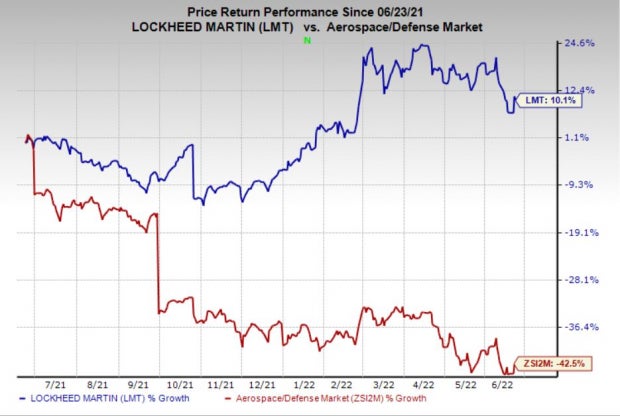