Century Aluminum Company (CENX - Free Report) is temporarily idling its smelter in Hawesville, KY, due to skyrocketing energy costs. The smelter is projected to begin the idling process on Jun 27, 2022.

The Hawesville facility is the biggest Century Aluminum smelter in the United States and the largest manufacturer of military-grade aluminum in North America. It employs more than 600 workers, most of whom received notice under the WARN Act that they will be temporarily laid off. The company is working with its employees and the local union to help identify unemployment support and training opportunities.

The company stated that it expects to idle operations for a period of roughly nine to twelve months until energy prices return to normal. CENX is still looking at all available options to avoid the temporary restriction.

Century Aluminum stated that this unprecedented rise in global energy prices led by the Russia-Ukraine conflict has considerably raised the price of energy in the United States and worldwide. The power cost required to run its Hawesville site has more than tripled the historical average in a short period. It is confident that energy prices will moderate in the next year and believe strongly in the future prospects of the Hawesville smelter given its recent performance and the continuing important role it plays in U.S. national security, the company noted.

Shares of Century Aluminum have declined 33% in the past year compared with a 31.3% plunge of the industry. 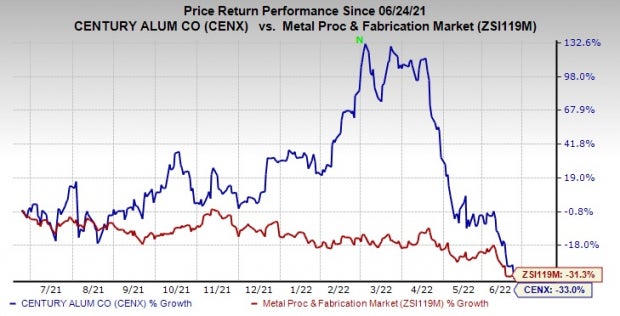 The company, in its last earnings call, stated that it is seeing strong demand in its core markets in the United States and Europe, while inventories have been drawn down to post-financial crisis lows. It continues to witness inflationary pressure in energy markets and other key raw materials. CENX continues to focus on cost discipline and execution that position it to benefit from historically high aluminum prices, the company noted.

Allegheny has a projected earnings growth rate of 1,030.8% for the current year. The Zacks Consensus Estimate for ATI's current-year earnings has been revised 40% upward in the past 60 days.

Allegheny’s earnings beat the Zacks Consensus Estimate in the last four quarters. It has a trailing four-quarter earnings surprise of roughly 128.9%, on average. ATI has gained around 1% in a year and currently sports a Zacks Rank #1 (Strong Buy). You can see the complete list of today’s Zacks #1 Rank stocks here.

Cabot’s earnings beat the Zacks Consensus Estimate in each of the trailing four quarters, the average being 16.2%. CBT has gained around 9.1% over a year.

Nutrien’s earnings beat the Zacks Consensus Estimate in three of the trailing four quarters, the average being 5.8%. NTR has gained 41.7% in a year. The company flaunts a Zacks Rank #1.