JPMorgan Chase & Co. (JPM - Free Report) has decided to slash several jobs in its home-lending division. The decision comes after rapidly rising mortgage rates and inflation have resulted in a downturn in the housing market. The news was first reported by Bloomberg.

More than 1,000 jobs will be affected by the move this week. According to people familiar with the matter who asked not to be identified, about half of the 1,000 employees will be moved to different divisions within the bank.

A JPMorgan spokesperson stated, “Our staffing decision this week was a result of cyclical changes in the mortgage market. We were able to proactively move many impacted employees to new roles within the firm, and are working to help the remaining affected employees find new employment within Chase and externally.”

During the pandemic, the housing market was red hot. However, the recent rise in mortgage rates has resulted in a drastic decline in demand within the market, resulting in a cool-down. So far this year, mortgage rates have increased to nearly 6%, driven by the rise in borrowing costs. As a result, sales of previously owned houses in the United States have fallen for a fourth month in May to the lowest level in almost two years.

In order to tame the red-hot inflation, last week, the Federal Reserve raised benchmark interest rates by 75 basis points (the biggest hike since 1994). This followed two smaller hikes, one in March and the other in May. Because of the ramp-up in rates, the thirty-year mortgage rate has already more than doubled from its record-low in January 2021.

In addition to JPMorgan, a downturn in the housing market has impacted Wells Fargo & Co.’s (WFC - Free Report) staffing levels. According to people familiar with the matter, WFC has also been laying off and reassigning employees in its home-lending division.

Wells Fargo’s CEO, Charles Scharf, stated, “When the mortgage market is down the way it is, there’s no getting around that your volumes fall dramatically, and we have to do our best to adjust our infrastructure to support that. So as much as you don’t want to be in a position to have to do that, from an employee perspective, we do have an obligation to make sure we’re properly staffed.”

Apart from the two banks, there is a growing list of real estate companies that are downsizing their workforce to cut costs.

Online real estate platform Redfin Corporation (RDFN - Free Report) announced that it would reduce its workforce by 8%. RDFN’s CEO, Glenn Kelman, cited the slowdown in home sales and a sharp rise in mortgage rates as the reason for this decision.

Over the past year, shares of JPMorgan have lost 24.5% compared with a decline of 19.2% recorded by the industry. 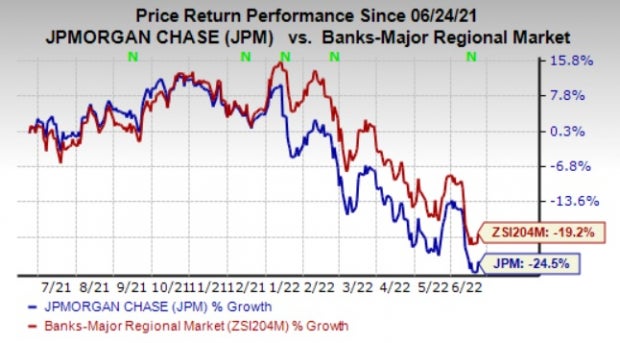