Earnings of $2.79 per share missed the consensus estimate by 1.8% but improved 16.3% year over year. The bottom line benefited from higher revenues and operating results, lower share count, lower interest and other non-operating expenses, partially offset by the loss on the disposition of the company’s business in Russia, higher effective tax rate and higher non-controlling interest.

During the reported quarter, the company witnessed continued solid, broad-based demand across all of its markets, services and industries.

Over the past year, shares of Accenture have declined 3.5% compared with 1.1% loss of the industry it belongs to and 12.4% loss of the Zacks S&P 500 composite. 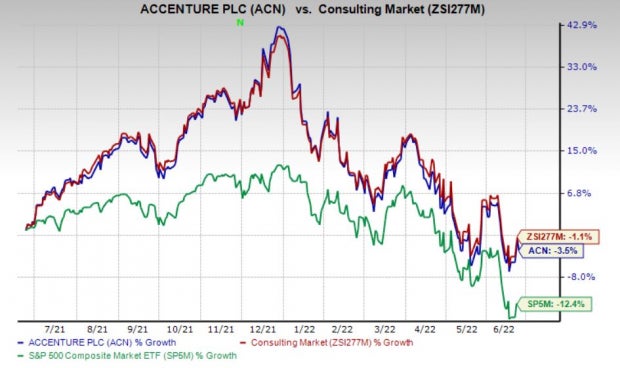 Accenture reported new bookings worth $17 billion in the quarter, up 10% year over year on a reported basis and 15% in terms of local currency. Consulting bookings totaled $9.1 billion and Outsourcing bookings summed $7.8 billion.

Cash provided by operating activities was $3.06 billion for the reported quarter. Free cash flow came in at $2.87billion.

On May 13, 2022, the company paid out a quarterly cash dividend of 97 cents per share to shareholders of record at the close of business on Apr 14, 2022. These cash dividend payouts totaled $614 million.

Accenture announced another quarterly cash dividend of 97 cents per share, to be paid out on Aug 15, 2022, to shareholders of record at the close of business on Jul 14, 2022.

During third-quarter fiscal 2022, Accenture repurchased 3.1 million shares for $972 million. The company had approximately 633 million total shares outstanding as of May 31, 2022.

For fourth-quarter fiscal 2022, Accenture expects revenues of $15-$15.5 billion. The Zacks Consensus Estimate of $15.95 billion lies above the guidance.

Accenture updated its guidance for fiscal 2022. Revenues are now expected to register 25.5-26.5% growth compared with the prior growth rate of 24-26%.

Operating cash flow is anticipated in the range of $8.7-$9.2 billion. Free cash flow is expected between $8.0 billion and $8.5 billion. The company expects to return nearly $6.5 billion in cash to shareholders through dividend payments and share repurchases.