Enphase Energy, Inc. (ENPH - Free Report) has been witnessing increased deployments of Enphase Energy Systems in New Mexico, thanks to the growing demand for energy storage products as the state anticipates a brutal heatwave this year.

Extreme weather conditions across the United States have been disrupting electric grids, thereby leading to more power outages than usual on numerous occasions. This, in turn, has led to increased homeowner interest in solar and battery systems. The state of New Mexico is expecting extreme heat this summer that may hit grid reliability.

Homeowners in New Mexico can now install Enphase’s revolutionary IQ8 Microinverters, which provide an impressive backup system during an outage, even in the absence of a battery.

No doubt these factors must have boosted the demand for energy storage systems like Enphase Energy System, which is a complete solar solution, comprising the company’s IQ Microinverters and IQ Batteries.

In 2021, renewable resources provided the largest share of in-state electricity generation for New Mexico, at almost two-fifths. Power from renewable energy has more than doubled since 2017, both in megawatt-hours and in the share of total generation. In 2019, New Mexico revised its 2004 renewable portfolio standard (RPS) and increased the state's required renewable energy targets to go carbon-free by 2045. These have set the stage for energy storage demand in the state.

As multifaceted impacts of global warming are projected to create more frequent irregularities in weather patterns around the world, energy storage demand is expected to increase manifold in the coming years.

Per the U.S. Energy Storage Monitor report from the Energy Storage Association and Wood Mackenzie, residential battery capacity in New Mexico is projected to grow nearly eight-fold by the end of 2026. Such a forecast exemplifies immense growth opportunities for ENPH to prosper on growing demand with its best-in-class battery storage systems and customer experience.

Per the U.S. Energy Information Administration, the United States is likely to witness an addition of 10,000 megawatts of large-scale battery storage projects to be installed between 2021 and 2023.

The long-term earnings growth rate of SolarEdge stands at 28.6%. The Zacks Consensus Estimate for SEDG’s 2022 sales implies an improvement of 54% over the prior-year estimated figure.

SunRun’s Bright Box battery storage system offers the flexibility to generate, store and manage clean, affordable solar energy. Brightbox can buffer homeowners from increasing energy costs so that they have power when they need it the most, thus enabling homeowners to take charge of their electric bills and get control of energy needs now and in the future.

The Zacks Consensus Estimate for RUN’s 2022 sales indicates an improvement of 21.9% over the prior-year reported figure.

SunPower’s Equinox system with SunVault Storage solution offers an effective storage solution to homeowners by collecting excess energy in the daytime and distributing it as needed to power essential devices during an outage. In March 2022, the company signed a deal, as part of which its Equinox home solar system will be deployed in all new houses built by Landsea in California, while home buyers in Arizona, Florida and Texas will also have the option to add the technology to their properties.

The Zacks Consensus Estimate for SunPower’s 2022 earnings suggests an improvement of 457.1% over the past year’s reported number. The long-term earnings growth rate for SPWR stands at 15.6%.

In the past year, shares of Enphase Energy have risen 14.4% against the industry’s 26.6% decline. 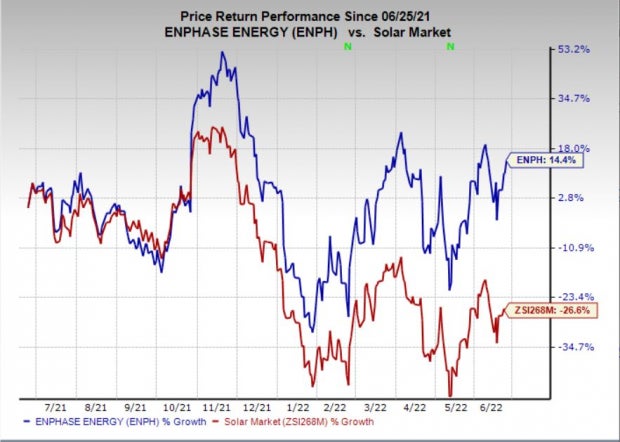 Will Supply-Chain Headwinds Continue to Mar NIKE (NKE) in Q4?