Shares of RAD jumped 20% at the close of the trading session on Jun 23. This might have resulted from the raised fiscal 2023 revenue outlook.

The company delivered an adjusted loss of 60 cents per share against earnings of 38 cents in the prior-year quarter. The figure was narrower than the Zacks Consensus Estimate of a loss of 70 cents.

Revenues declined 2.4% to $6,015 million and surpassed the Zacks Consensus Estimate of $5,728 million. Sluggishness in both Retail Pharmacy and Pharmacy Services segments hurt sales.

In the quarter, the Retail Pharmacy segment's revenues fell 0.1% due to a reduction in COVID-19 vaccines and testings, as well as store closures, somewhat offset by higher non-COVID-19 prescriptions.

For fiscal 2023, capital expenditure is forecast to be $250 million, which is to be utilized for investments in digital capabilities, technology, prescription file purchases, distribution center automation and store remodels. The company also expects to generate positive free cash flow in fiscal 2023.

Management raised its fiscal 2023 revenue expectations, driven by the increased use of higher-cost drugs at Elixir. Rite Aid’s revenues are anticipated to be $23.6-$24 million, up from the earlier mentioned $23.1-$23.5 billion. The Retail Pharmacy segment’s revenues are likely to be $17.35-$17.65, down from the previously communicated $17.7-$18 billion. Meanwhile, the Pharmacy Services segment’s revenues are expected to be $6.25-$6.35 billion, which compares favorably with the prior mentioned $5.4-$5.5 billion.

In a recent development, Rite Aid collaborated with Afterpay to enhance the customer experience. With this, RAD became the first national drugstore chain to offer the service of shop online and pay later via Afterpay.

This Zacks Rank #3 (Hold) company revealed plans to expand the Rite Aid Rewards program to improve customer engagement in pharmacy and front-end sales. It also intends to reduce Elixir insurance membership to manage the business's profitability. In the reported quarter, RAD launched 546 newly designed products, and expects to launch more in the second half of this year. It also remains on track with plans to open small-format pharmacies in underserved rural markets such as Indiana, upstate New York and Virginia. 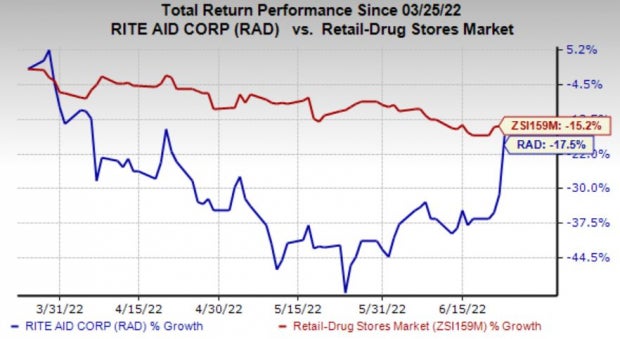 We note that shares of RAD have lost 17.5% in the past three months compared with the industry's decline of 15.2%.

Canada Goose is the designer, manufacturer, distributor and retailer of premium outerwear for men, women and children. It currently carries a Zacks Rank #2. GOOS has a trailing four-quarter earnings surprise of 65.9%, on average.