Adjusted earnings per share (excluding $1.83 from non-recurring items) of $3.76 surpassed the Zacks Consensus Estimate by 18.2% and increased 38.2% year over year. The bottom line was driven by higher revenues and margin expansion.

FactSet’s revenues of $488.8 million in the quarter surpassed the Zacks Consensus Estimate by 2.7% and increased 22.3% year over year. The uptick was driven by higher sales of analytics, and research and advisory solutions as well as the acquisition of CUSIP Global Services (CGS) in March 2022.

Shares of FDS have gained 16.7% over the past year against an 18.2% decline of the industry it belongs to. 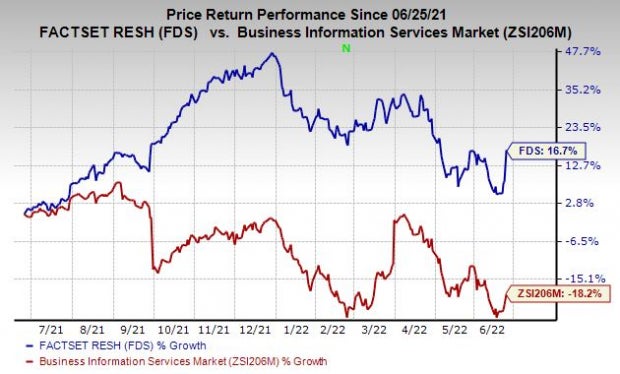 Organic ASV generated from the United States was $1.1 billion, up 10.1% from the prior-year quarter’s level. Organic ASV from EMEA and the Asia Pacific regions was $471 million and 186.1 million each, up 8.3% and 14.3% year over year, respectively.

FactSet added 147 clients in the reported fiscal quarter, driven by an increase in corporate and wealth clients, taking the total to 7,319. The annual client retention rate was 92%. At the end of the said fiscal quarter, the total employee count was 10,691, down 0.2% from the last twelve months’ level, primarily in the technology organization.

Accenture plc (ACN - Free Report) reported mixed third-quarter fiscal 2022 results, wherein its earnings missed the Zacks Consensus Estimate but revenues surpassed the same. Earnings of $2.79 per share missed the consensus estimate by 1.8% but improved 16.3% year over year. Revenues of $16.16 billion beat the consensus mark by 0.7% and increased 22% year over year on a reported basis and 27% in terms of local currency.

Nvidia vs. AMD: Which Company Should Investors Focus On?