Phillips 66 (PSX - Free Report)  started to refine renewable diesel in a unit at its Rodeo refinery without proper authorization, per a report by Reuters.

The company began to refine low volumes of soybean oil at the Rodeo refinery in the first quarter of 2021. The move is part of the company’s strategy to be a leading producer of renewable fuel from animal fats and soybean oil in the United States.

California regulators accused Phillips 66 of improperly making renewable diesel in one of the refinery units. A violation notice was issued by the Bay Area Air Quality Management District (“BAAQMD”) earlier this month, stating that the company started processing renewable diesel without modifying the existing air permit.

The existing permit enables a similar type of processing with petroleum feedstock. Notably, BAAQMD has been looking at whether Phillips 66 modified its petroleum refinery without additional permits after facing pressure from environmental groups last year.

Environmental groups alleged that the company failed to apply for a permit for using alternative fuel in one of the refinery units. However, Phillips 66 denied the allegations and is attempting to resolve the violation notice. The company claimed that it submitted an air permit modification request to the district.

Investigations are ongoing to determine whether Phillips 66 needed permits for making changes to a refinery unit. Regulators warned that they would issue enforcement action once investigations complete.

Phillips 66 recently made a final investment decision to convert its San Francisco refinery in Rodeo into a renewable fuel plant. The cost of the project Rodeo Renewed, which got approval from Contra Costa County recently, is expected to be $850 million. PSX boasted that the fuel unit would be among the largest renewable fuel facilities across the globe.

Shares of the company have outperformed the industry in the past three months. The stock has gained 3.4% against the industry’s 0.1% decline. 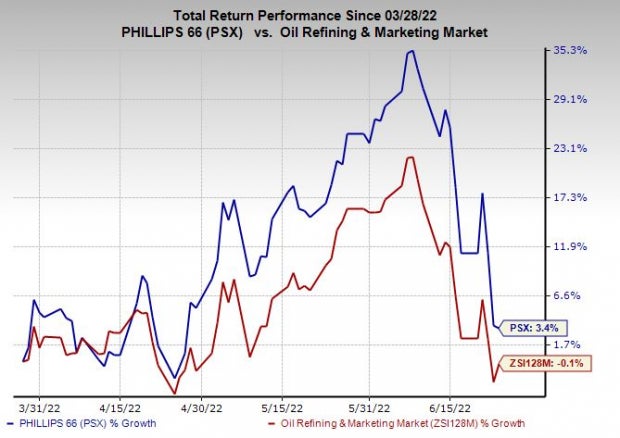 Investors interested in the energy sector might look at the following companies that also presently flaunt a Zacks Rank #1. You can see the complete list of today's Zacks #1 Rank stocks here.

Suncor has debt maturities of merely C$1.8 billion for 2021-2022 and sits on more than C$4 billion in total liquidity. It has cash and cash equivalents of C$2.1 billion. Suncor’s robust liquidity position will allow it to sustain its dividends, even if oil prices stay lower for longer. The company recently hiked its dividend by 12% to 47 Canadian cents per share (after doubling it previously) and increased the buyback authorization to roughly 10% of its public float.

PBF Energy Inc. (PBF - Free Report) , based in New Jersey, is a leading refiner of crude oil. The company’s daily processing capacity of 1,000,000 barrels of crude oil is higher than most peers.