Emergent BioSolutions (EBS - Free Report) announced that the FDA has accepted its biologics license application (BLA), seeking approval for its new anthrax vaccine, AV7909, for review. A decision on potential approval for the vaccine candidate from the FDA is expected in April next year.

The AV7909, an adsorbed, adjuvanted anthrax vaccine, has been evaluated in adults aged 18 years to 65 years for post-exposure prophylaxis of disease following suspected or confirmed exposure to Bacillus anthracis. The vaccine is administered in conjunction with recommended antibacterial drugs.

Although AV7909 is yet to be approved by the FDA, it is one of the key revenue growth drivers for Emergent as the U.S. government procures the anthrax vaccine for the strategic national stockpile (SNS) through the Biomedical Advanced Research and Development Authority (BARDA) that is responsible for the procurement and development of medical countermeasures. The company has a purchase contract for AV7909 in place with the BARDA, effective till 2025.

The rising priority of AV7909 in the U.S. government’s SNS and a better efficacy compared to BioThrax suggest a likely approval of the vaccine candidate next year. A potential approval to AV7909 will likely allow Emergent to commercialize the vaccine in the U.S. market along with supply to the SNS.

Shares of Emergent BioSolutions have declined 24.6% in the year so far compared with the industry’s 21.7% decrease. 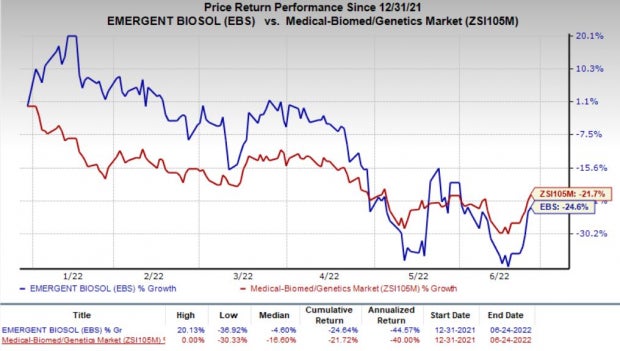 Apart from its anthrax vaccines, Emergent has other products in its portfolio that are mainly procured by the government for medical countermeasures. The company also has three commercial products that are available in U.S. markets — Narcan nasal spray, Vaxchora and Vivoti — for treating opioid overdose and prevention of cholera and typhoid fever, respectively.

Emergent also provides contract development and manufacturing services to other pharma/biotech companies. However, it received a setback last month as one of its leading partners, Johnson & Johnson (JNJ - Free Report) , decided to terminate its contract with Emergent to develop its COVID-19 vaccine. Reportedly, J&J cited contract breaches, including failure to supply the COVID-19 vaccine drug substance, for the termination of the deal.

However, Emergent alleged that J&J breached the contract agreements in reply to J&J’s claims. Emergent stated that J&J failed to provide information on the requisite quantity of the product that the latter needed to purchase. Emergent sent a notice with the aforementioned claim. The notice also seeks confirmation from J&J about its intent to wind down the agreement instead of purchasing the requisite minimum quantity of the product pursuant to the agreement.

The Zacks Consensus Estimate for Alkermes’ 2022 loss per share has narrowed from 10 cents to 3 cents in the past 60 days. Shares of ALKS have risen 27.8% year to date.

The Zacks Consensus Estimate for Sesen Bio’s 2022 loss has narrowed from 46 cents to 44 cents per share in the past 60 days. Shares of SESN have gained 0.3% in the year-to-date period.

Paychex (PAYX) Set to Report Q4 Earnings: What to Expect?