Tesla Inc. (TSLA - Free Report) recently announced that it will partly put the shutters down on its Gigafactory Shanghai for a few weeks to upgrade the production capacity to a whopping 21,000 electric vehicles (EVs) per week.

Due to the resurgence of COVID-19 cases in China and stringent lockdowns in the first quarter, Tesla was forced to shut down production at its Shanghai factory last month. The automaker was finally able to restart production on Apr 19 after a 22-day hiatus.

It is a voluntary shutdown this time, scheduled to restart in July and run through early August.

The upgrades to Gigafactory Shanghai will be carried out in stages. The Model Y line will be upgraded first, with the company holding back most of the production of the all-electric crossover during the first two weeks of July. The Model 3 upgrades are expected to take place for 20 days beginning Jul 18.

Prior to the shutdown, Gigafactory Shanghai was operating at a full production capacity of about half a million vehicles per year after fresh lockdowns were imposed. Tesla’s ambitious expansion plans of the factory can be counted as building a brand new unit.

Tesla expects Gigafactory Shanghai to become the world’s largest vehicle export hub once the upgrades are in place. A number of vehicles produced at the unit are exported to other Asian markets, Oceania and Europe.

Moreover, Tesla is trying to ramp up production at its Gigafactory units in Berlin and Texas, where production of Model Y began a few months ago.

Tesla China will lose significant units of vehicle production in the third quarter due to Giga Shanghai’s upcoming upgrades. However, the enhancements are likely to add on an impressive number of Model Y and Model 3 units for the last two months of the third quarter, narrowing down the net loss.

Shares of TSLA have gained 6.7% over the past year against its industry’s 22.7% decline. 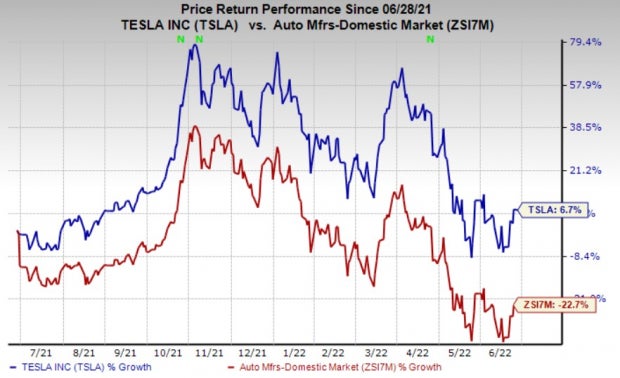 Wabash National’s earnings beat the Zacks Consensus Estimate in three of the trailing four quarters and missed in one. WNC pulled off a trailing four-quarter earnings surprise of 51.26%, on average. The stock has declined 12.1% over the past year.

Genuine Parts has an expected earnings growth rate of 13.6% for the current year. The Zacks Consensus Estimate for current-year earnings has remained constant in the past 30 days.

Genuine Parts’ earnings beat the Zacks Consensus Estimate in all the trailing four quarters. GPC pulled off a trailing four-quarter earnings surprise of 11.34%, on average. The stock has gained 8.8% over the past year.

Standard Motor has an expected earnings growth rate of 5.2% for the current year. The Zacks Consensus Estimate for current-year earnings has been revised around 3.1% upward in the past 30 days.

Standard Motor’s earnings beat the Zacks Consensus Estimate in all the trailing four quarters. SMP pulled off a trailing four-quarter earnings surprise of 40.34%, on average. The stock has increased 5.5% over the past year.

Is it Wise to Hold on to Regency Centers (REG) Stock Now?