Novartis (NVS) Gets Positive CHMP Opinion for Scemblix in CML

Novartis AG (NVS - Free Report) announced that the European Medicines Agency’s Committee for Medicinal Products for Human Use (“CHMP”) has rendered a positive opinion on, and recommended granting marketing authorization to Scemblix (asciminib).

The committee recommended approval to Scemblix for the treatment of Philadelphia chromosome-positive chronic myeloid leukemia in the chronic phase (Ph+ CML-CP), in adult patients who are previously treated with two or more tyrosine kinase inhibitors (TKIs).

The CHMP’s opinion will now be reviewed by the European Commission (“EC”), with decision from the same expected in the upcoming months.

The positive CHMP opinion was based on data from the pivotal phase III ASCEMBL study which evaluated Scemblix in the given patient population. Data from the same demonstrated a near doubling of the major molecular response rate for patients treated with Scemblix versus Bosulif, and more than three times lower discontinuation rate due to adverse reactions at 24 weeks of treatment.

Per the company, if approved in Europe, Scemblix will become the first CML treatment that works by specifically targeting the ABL myristoyl pocket (also known as a STAMP inhibitor). With the distinctive STAMP mechanism, Scemblix could eventually offer a new treatment option to patients with CML who have suffered intolerance or inadequate response with at least two prior TKI treatments in Europe.

The FDA granted accelerated approval to Scemblix for treating adult patients with Ph+ CML-CP, previously treated with two or more TKIs, in October 2021.

Shares of Novartis have lost 3% so far this year against the industry’s increase of 5.9%. 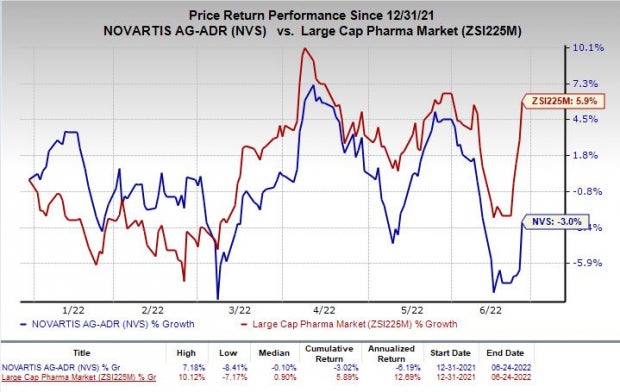 In a separate press release, Novartis announced that the EC has approved its blockbuster arthritis drug — Cosentyx (secukinumab) — for a new indication.

The EC has now approved Cosentyx alone or in combination with methotrexate in the juvenile idiopathic arthritis categories of enthesitis-related arthritis (“ERA”) and juvenile psoriatic arthritis (JPsA) in patients aged six years and above whose disease has responded inadequately to, or who cannot tolerate conventional therapy.

The latest approval was based on data from the phase III JUNIPERA study, which demonstrated significantly longer time to flare in treatment with Cosentyx versus placebo in pediatric patients with ERA and JPsA.

Cosentyx received the EMA’s approval as a first-line systemic treatment for pediatric psoriasis in patients aged six to 18 years in July 2020.

Earnings of United Therapeutics have surpassed estimates in three of the trailing four quarters and missed the same on the other occasion. UTHR delivered an earnings surprise of 15.34%, on average.

Earnings of Novo Nordisk have surpassed estimates in each of the trailing four quarters. NVO delivered an earnings surprise of 7.56%, on average.

Is Gold Losing Its Safe-Haven Status?