Berry Global Group, Inc. (BERY - Free Report) has been benefiting from its presence in the diversified end markets, including food, healthcare, pharmaceutical and beverage. Also, its robust product portfolio, the bulk of which includes consumer non-discretionary products is likely to be beneficial in the quarters ahead. Berry Global anticipates overall organic sales growth of flat to 1% for fiscal 2022 (ending September 2022).

Berry Global stands to gain from its growth investments. Its investments in the latest equipment technologies and design for circularity continue to enhance its competency. Also, in Sira, Bangalore, BERY recently started constructing a second manufacturing facility and a Global Healthcare Center. When completed, the facility will enhance its research and development expertise and boost production in several major healthcare sectors.

BERY’s balanced capital-allocation strategy allows it to utilize its cash flow for acquisitions and repayment of debt. Berry Global’s acquired business of RPC Group in July 2019 enhanced its growth opportunities in the plastic and recycled packaging industry. Also, BERY repaid its long-term debt of $3,496 million and $9 million in fiscal 2021 (ended September 2021) and in the first six months of fiscal 2022, respectively.

Berry Global is committed to rewarding its shareholders through share-repurchase programs. In February 2022, BERY announced a share repurchase program worth 1 billion. It bought back $350 million worth of shares in the first half of fiscal 2022. Exiting the second quarter of fiscal 2022 (ended March 2022), Berry Global had shares worth $700 million left to repurchase from its previously-announced $1-billion share buyback plan.

However, Berry Global has been dealing with escalating costs and expenses over time. In second-quarter fiscal 2022, BERY’s cost of sales increased 16.6% on a year-over-year basis. Also, the adjusted operating margin declined 200 basis points on a year-over-year basis to 9.2% in the quarter. Inflation in raw material, and other costs and challenges related to labor and supply-chain constraints are expected to persist in the near term affecting BERY’s margins and profitability.

Foreign exchange is a major headwind to Berry Global due to a considerable percentage of its revenues coming from outside the United States. In the fiscal second quarter, foreign exchange woes had an adverse impact of $64 million on its sales year over year. Decline in the value of the local currencies of foreign markets relative to the U.S. dollar might affect BERY’s top line in the quarters ahead. 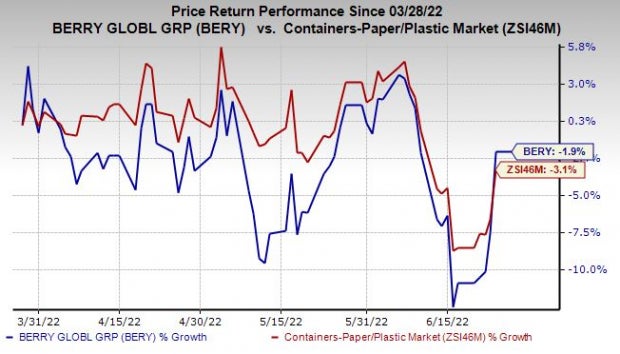 In the past three months, this currently Zacks Rank #3 (Hold) stock has dipped 1.9% compared with the industry’s decline of 3.1%.

Some better-ranked companies from the industrial products sector are discussed below:

Roper Technologies, Inc. (ROP - Free Report) presently has a Zacks Rank #2 (Buy). Its earnings surprise in the last four quarters was 2%, on average.

Nordson Corporation (NDSN - Free Report) presently carries a Zacks Rank of 2. Its earnings surprise in the last four quarters was 4.5%, on average.