Results reflect gains from its Consumer Direct Acceleration strategy, along with strong demand, compelling products, and robust performance in its digital and DTC businesses. Strength in EMEA and APLA regions also remained upsides. However, the ongoing industry-wide supply-chain disruptions led to product shortages. Moreover, the resurgence of COVID-19 in Greater China and the exit from the Russia business hurt results.

Shares of NIKE declined 2.7% following the fourth-quarter fiscal 2022 results. Overall, shares of the Zacks Rank #5 (Strong Sell) company have plunged 20.6% in the past three months compared with the industry’s decline of 17.8%. 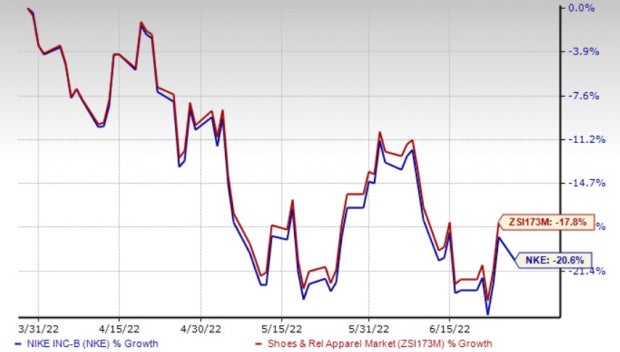 Revenues of the Swoosh brand owner dipped 1% year over year to $12,234 million but surpassed the Zacks Consensus Estimate of $12,067 million. On a currency-neutral basis, revenues grew 3% year over year, driven by growth in the NIKE Direct business, partly offset by a decline in the Wholesale business.

Meanwhile, revenues at the owned retail business remained soft. NIKE-owned store revenues dropped 2% on a reported basis and increased 1% on a currency-neutral basis.

Wholesale revenues declined 7% on a reported basis to $6.8 billion and improved 3% on a currency-neutral basis. This is mainly due to strength in the EMEA and APLA regions, which somewhat offset sluggishness in North America and Greater China.

The NIKE Brand revenues were $11,657 million, down 1% year over year on a reported basis. Revenues for the brand rose 3% on a constant-neutral basis. Strength in EMEA and APLA regions aided the results.

Within the NIKE brand, revenues in North America declined 5% on both reported and currency-neutral basis to $5,115 million. North America revenues were marred by lower available inventory due to higher in-transit levels. Wholesale revenues for the segment declined 12% due to inventory supply constraints.

Sales for the NIKE Direct business were up 5% in the region. Digital sales grew 11%, owing to low markdown rates and lower availability of inventory supply. NIKE Digital penetration reached 27% in the quarter, driven by growth in the NIKE app. In the quarter, Pegasus was the best in performance footwear, followed by Jordan launch and classics like Dunk and Blazer.

In EMEA, the company’s revenues rose 9% on a reported basis and 20% on a currency-neutral basis to $3,251 million. The continuation of sporting activities, including growth in running and fitness, performance franchises such as Metcon and Mercurial and apparel launches aided sales in this region. The improvement was also driven by broad-based growth across channels, consumer dimensions and product engines. Consequently, NIKE Direct revenues for the segment rose 25% on a currency-neutral basis, led by improved retail traffic due to the lapping of the prior year’s COVID-related closures.

In Greater China, revenues slumped 19% year over year on a reported basis and 20% on a currency-neutral basis in the fiscal fourth quarter to $1,561 million. The region was impacted by the resurgence of the COVID-19 outbreak, affecting more than 100 cities and 60% of its business. However, NIKE Digital revenues improved in the low-single digits, owing to quickly shifting inventory to meet the strong digital demand. In addition, as lockdowns lifted in specific trade zones in late April, May and early June, the company witnessed improved store traffic and overall consumer demand.

In APLA, NIKE revenues advanced 15% on a reported basis and 24% on a currency-neutral basis to $1,682 million. Revenues gained from double-digit currency-neutral growth across Korea, Mexico, Southeast Asia, and India and Japan. Strength in the women’s category, led by performance running, classics and lifestyle apparel, also aided quarterly growth. NIKE Direct advanced 43%, driven by a 59% surge in NIKE Digital.

Revenues at the Converse brand fell 1% on a reported basis to $593 million. On a currency-neutral basis, revenues of the segment were up 3%, backed by growth in the direct-to-consumer business, somewhat offset by a decline in wholesale revenues.

The gross profit declined 3% year over year to $5,503 million, while the gross margin contracted 80 basis points (bps) to 45%. The decline in the gross margin can be attributed to higher inventory obsolescence reserves in Greater China, and increased freight and logistics costs. This was partly negated by the company’s pricing actions, favorable changes in foreign currency rates, including hedges, and margin expansion in the NIKE Direct business.

Selling and administrative expenses rose 8% to $4,035 million due to higher operating overhead and demand-creating expenses. As a percentage of sales, SG&A expenses expanded 270 bps from the prior-year quarter to 33%.

Operating overhead expenses were up 8% to $2,974 million on higher wage-related expenses and NIKE Direct variable costs, as well as increased technology investments to support digital transformation.

As of May 31, 2022, inventories of $8,420 million increased 23% from the prior-year levels due to elevated in-transit inventories. The delays are mainly related to the extended lead times due to the ongoing supply-chain disruptions, partly negated by strong consumer demand.

In June 2022, the company authorized an $18-billion share repurchase program on NIKE’s class B shares. The program extends for four years. The new program replaces the current $15-billion program, which will be terminated in fiscal 2023.

The company remains confident of its performance in fiscal 2023, driven by brand strength, consumer connections, product pipeline and normalizing of inventory supply in North America, EMEA and APLA. However, it remains cautious of Greater China due to the uncertainty around additional COVID-19 disruptions. Further, it has factored in various risks in its fiscal 2023 view.

Management expects fiscal 2023 revenues to increase in the low-double digits on a currency-neutral basis. The company anticipates a 400-bps foreign exchange headwind for fiscal 2023. The company expects the gross margin to be flat to down 50 bps for fiscal 2023. The gross margin is expected to benefit in the mid-single digits from pricing actions and continued gains from the shift to a more direct business. This is likely to be offset by a 100-bps headwind from elevated ocean freight and product costs, supply-chain investments and normalization of historically low markdown rates. Further, foreign exchange is likely to be a 30-bps headwind to the gross margin, owing to the strength in U.S. Dollar.

In fiscal 2023, SG&A expenses are expected to increase in the high-single digits to low-double digits, driven by continued investments in people, brands, new stores and transformational capabilities. The effective tax rate is expected to be in the mid-teens in fiscal 2023.

For first-quarter fiscal 2023, the company expects real dollar revenue growth to be flat to up slightly due to COVID-19 disruptions in Greater China and more than 500-bps impact from foreign currency. It expects a more than 100-bps decline in the gross margin for the fiscal first quarter, owing to efforts to streamline supply and demand in Greater China. Moreover, increased higher promotional activity to sell seasonal inventory, which has arrived late due to a combination of factory closures and longer transit times, is likely to hurt the gross margin.

Caleres presently sports a Zacks Rank #1 (Strong Buy). CAL has a trailing four-quarter earnings surprise of 62.9%, on average. You can see the complete list of today’s Zacks #1 Rank stocks here.

The Zacks Consensus Estimate for Caleres’ current financial-year sales and earnings suggests growth of 5.2% and 0.7% from the year-ago period’s reported numbers, respectively.

The Zacks Consensus Estimate for Delta Apparel's current financial year’s sales and earnings per share suggests growth of 14.6% and 45.8%, respectively, from the year-ago period's reported numbers.