Data from the MISSION study showed that treatment with zetomipzomib led to 64.7% of active LN patients in the study achieving an objective response rate, as measured by a 50% or greater reduction in urine protein to creatinine ratio (UPCR) from baseline at six months. Moreover, 35.2% of patients achieved a complete response rate (CRR) with a UPCR of 0.5 or less.

The benefits achieved with zetomipzomib therapy were maintained or deepened following the end of treatment at week 25. At week 29, 94.1% of study patients achieved an ORR and complete response was sustained in patients who achieved CRR at six months.

The treatment with zetomipzomib also led to a decline in mean daily prednisone background dosage of 52.6% from baseline after six months of treatment, which was further reduced at week 29. The mean estimated glomerular filtration rate, a measure of kidney function, was also stable compared to baseline. The candidate was also well tolerated in active LN patients over the course of the treatment period. The candidate has all important attributes to be a potential effective treatment for patients with autoimmune disease who are often young and active.

Data from the MISSION study demonstrates the potential of zetomipzomib in achieving a clinically meaningful overall renal response to zetomipzomib after six months without high-dose induction therapy — typical of current treatment options.

Currently, there are very few treatment options available for active LN patients, who bear a risk of considerable morbidity. The promising study data on zetomipzomib implies a strong opportunity for the candidate in this patient population, following successful development and potential approval.

Shares of Kezar surged 102.6% during after-hours trading on Jun 27, following the positive data readout. However, shares of the company have declined 65.4% so far this year compared with the industry’s decrease of 21.7%. 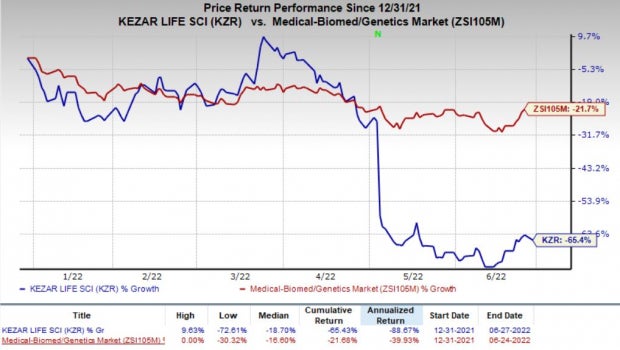 Based on encouraging data from the MISSION study, Kezar is planning to continue the development of zetomipzomib for patients with LN, as well as evaluate development opportunities for SLE.

Apart from LN, Kezar is also developing zetomipzomib as a potential treatment for active dermatomyositis (DM) or polymyositis (PM). Data readout from another mid-stage study, PRESIDIO, last month showed that treatment with the candidate clinically meaningful improvements in total improvement score in DM and PM patients. However, it failed to significantly differentiate from the placebo. Kezar has another candidate, KZR-261, in its pipeline, which is being evaluated in a phase I study in patients with locally advanced or metastatic solid malignancies.

The Zacks Consensus Estimate for Alkermes’ 2022 loss per share has narrowed from 10 cents to 3 cents in the past 60 days. Shares of ALKS have risen 28% year to date.

The Zacks Consensus Estimate for Sesen Bio’s 2022 loss has narrowed from 44 cents to 42 cents per share in the past 60 days. Shares of SESN have gained 0.1% in the year-to-date period.

Earnings of Aegleas beat estimates in two of the last four quarters and missed the mark twice, the average surprise being 9.47%.