Per Ryanair Holdings’ (RYAAY - Free Report) management, strikes by its cabin crew members in certain European countries over the weekend did not have any meaningful impact on its operations. In all probability, pilots of Chicago-based United Airlines (UAL - Free Report) will get significant pay hikes over the next 18 months.

With labor problems hurting the U.S. airline industry, the approval of a tentative two-year agreement covering about 14,000 pilots at UAL is certainly a huge positive. Like UAL, Alaska Airlines, the wholly-owned subsidiary of Alaska Air Group (ALK - Free Report) , too received encouraging tidings on the labor front when it reached a provisional pay-related agreement with the International Association of Machinists and Aerospace Workers (IAM).

1.Per the latest offer from Frontier, ULCC increased its per-share cash consideration by $2 to $4.13, payable to Spirit Airlines’ shareholders. This is in addition to 1.9126 Frontier shares that ULCC had agreed to pay previously. ULCC will also prepay $2.22 per share to SAVE’s shareholders as cash dividend upon approval of the transaction. Frontier also increased its reverse termination fee by $100 million to $350 million, payable to Spirit Airlines in case the deal fails to materialize due to antitrust concerns.

Not to be left behind, JetBlue, currently carrying a Zacks Rank #3 (Hold),came up with an improved offer to buy SAVE. Per the enhanced offer, JetBlue will prepay $2.50 per share as cash dividend to SAVE’s shareholders soon after they vote in favor of the deal. This is higher than the prepayment of $1.50 per share agreed upon previously. JBLU has also increased the reverse break-up fee to $400 million from the previous $350 million, payable to Spirit Airlines in case the deal falls through due to antitrust concerns. JetBlue’s improved proposal also includes a ticking fee to provide Spirit Airlines shareholders with a monthly prepayment of 10 cents per share between January 2023 and the closing or termination of the deal. This increases the transaction value to $34.15 per share.

2. UAL’s pilots, represented by the Air Line Pilots Association, Int’l (ALPA), approved a tentative agreement on modified terms for their collective bargaining deal. The United Master Executive Council represents 14,000 professional pilots at UAL. The provisional agreement will now be sent for ratification. The voting procedure must be complete by Jul 15. The provisional deal will be valid only if the voting result is favorable. On successful ratification, the TA will generate an additional value of $1.3 billion for the United Airlines pilots over the two-year long agreement.

Under the terms of the agreement, pilots will get three pay-rate raises totaling more than 14.5% within 18 months, retroactive to the commencement of the current year. The deal also includes a new eight-week paid maternity leave benefit, better overtime and premium pay, a new retirement plan and improved scheduling provisions, among other benefits.

3. At Alaska Airlines, the tentative deal covers 5,300 employees, including those who work at the ramp, stores, clerical, office and passenger service for the Seattle, WA-based airline. However, the deal does not cover roughly 2,000 ramp workers, also represented by IAM, who work for the McGee Air Services subsidiary and handle baggage on passenger flights. The four-year deal, on materialization, will make the 5,300 employees eligible for a substantial pay raise. Salient features of the contract include higher base wage rates for all classifications in the 8.9-17.4% band, effective Aug 10, 2022. The employees will be eligible for a further 2.5% hike in all base wage rates for all classifications from the same date of 2023. Base wage rate will also increase 2.5% for the following two years. The existing job security clause (amendable on Sep 27, 2026) is extended to Sep 27, 2028.

4.  Per a Reuters report, strikes by RYAAY’s cabin crew in various European nations did not leave much impact on the airline’s operations. Per management, "Less than 2% of Ryanair's 9,000 flights operating this weekend (24/25/26 June) have been affected by minor and poorly supported crew strikes". Cabin crew members in Spain are scheduled to go on a strike again for three days starting Jun 30. That RYAAY would face strikes by its cabin crew over the weekend was mentioned in the previous week’s write-up. 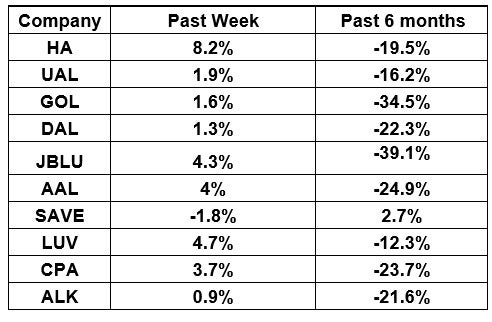 All eyes will be on Spirit Airlines shareholders’ vote scheduled for Jun 30. The outcome of Thursday’s vote should bring down the curtains on the bidding war for SAVE.