MRC Global Inc. (MRC - Free Report) has been gaining from strength in end markets like upstream production, gas utilities, midstream pipelines, downstream, industrial and energy transition and others, of late. For 2022, it expects revenues from its business in the gas utility sector to witness double-digit percentage growth year over year, driven by higher gas distribution system integrity management activities. For the year, revenues from its business in the downstream, industrial and energy transition sectors are likely to increase in double-digit percentage, backed by project turnaround activity and new energy transition-related projects. For 2022, it anticipates revenues of $3.1 billion, suggesting growth of 14.9% year over year.

However, rising costs and operating expenses pose a concern. In first-quarter 2022, its cost of sales increased 19.8% on a year-over-year basis, while selling, general and administrative expenses recorded an increase of 7%. Supply chain issues and increases in raw material costs are likely to continue affecting its margins and profitability.

Given its widespread presence in the international markets, MRC is exposed to unfavorable foreign currency movements. In first-quarter 2022, its revenues for the International segment declined 13% on a year-over-year basis. A stronger U.S. dollar might depress MRC's overseas business results in the quarters ahead. 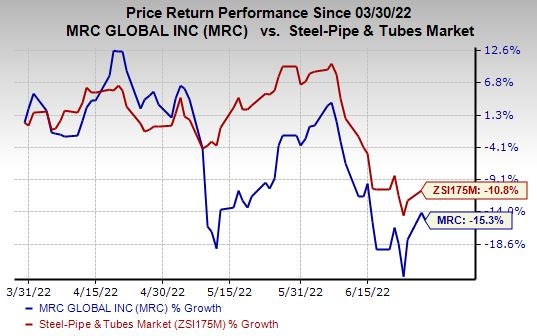 Some better-ranked companies from the Zacks Industrial Products sectors are discussed below.

IDEX’s earnings estimates have increased 1.9% for 2022 in the past 60 days. Its shares have declined 7.5% in the past three months.

Roper Technologies, Inc. (ROP - Free Report) presently has a Zacks Rank of 2. Its earnings surprise in the last four quarters was 2%, on average.