Sony plans to tap the growing market for gaming gear, which is gaining from the increasing reach of major sports tournaments like the PGL DOTA2 Arlington Major 2022 and the VALORANT Champions Tour.

The gaming headsets have 360 Spatial Sound to provide an immersive experience and comfortable headbands and ear pads for long hours of gaming.

The distinctive features of the INZONE H9 are noise cancellation and ambient sound mode. Users can game up to an hour with just a 10-minute quick charge, per company estimates.

The packaging material used for the headset is plastic-free, recycled materials and non-woven cellulose.

The INZONE monitors and headsets can be customized by the users per their needs through the INZONE Hub PC software.

Previously, Sony had made an investment of approximately $1 billion in Epic Games through its wholly-owned subsidiary, Sony Corporation of America, to expand its foothold in the gaming space.

In fiscal 2021, Game & Network Services segment revenues were up 3%, driven by hardware sales. Sony plans to improve sales in this segment through collaboration and product launches. 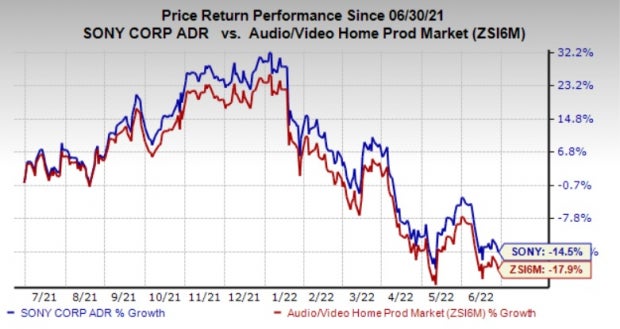 Nexstar earnings beat the Zacks Consensus Estimate all last four quarters, with the average being 19.6%. Shares of Nexstar have jumped 12.5% in the past year.

Gray earnings beat the Zacks Consensus Estimate all last four quarters, the average being 37.5%. Shares of Gray have declined 25.8% in the past year.

Broadcom’s earnings beat the Zacks Consensus Estimate in all the preceding four quarters, with the average being 2.2%. Shares of AVGO have soared 4.5% in the past year.

Should Investors Be Considering Dividend-Paying Stocks?