The biotech sector has been in the spotlight in the past week with important pipeline and regulatory updates. Deals and collaborations have also taken center stage in this space.

Epizyme Surges on Acquisition News:  Shares of Epizyme, Inc. surged following the news of its acquisition by European company Ipsen (IPSEY - Free Report) . Per the terms, Ipsen will acquire all the outstanding shares of Epizyme for an estimated aggregate consideration of $247 million. Ipsen will pay cash of $1.45 per share to current Epizyme shareholders and one contingent value right (CVR) per share. A CVR of 30 cents per share will be paid by Ipsen if, by Dec 31, 2026, the aggregate sales of EPZM’s lead drug Tazverik (excluding sales in Japan and Greater China) in any four consecutive quarters cross $250 million. In addition, the shareholders will get 70 cents per share if the combination of Tazverik and R2 (rituximab and Revlimid) gets FDA approval to treat second-line follicular lymphoma by Jan 1, 2028.

Investors cheered the news as the offer price of $1.45 represented a premium of 52.7% to Epizyme’s closing price on Jun 24. Tazverik (tazemetostat), a first-in-class, chemotherapy-free EZH2 inhibitor, was granted Accelerated Approval by the FDA for adults with relapsed or refractory follicular lymphoma (FL) whose tumors are positive for an EZH2 mutation as detected by an FDA-approved test and who have received at least two prior systemic therapies. It is also approved for adult patients with relapsed or refractory follicular lymphoma who have no satisfactory alternative treatment options, as well as for adults and pediatric patients aged 16 years and older with metastatic or locally advanced epithelioid sarcoma not eligible for complete resection.  The acquisition will bolster Ipsen’s growing oncology presence.

Kezar Surges on Study Data:  Shares of clinical-stage biotechnology company Kezar Life Sciences, Inc. (KZR - Free Report) skyrocketed after the company reported positive top-line results from the MISSION phase II study evaluating zetomipzomib, a novel, first-in-class selective immunoproteasome inhibitor, in patients with active lupus nephritis (LN), a type of kidney disease. Data from the MISSION study showed that treatment with zetomipzomib led to 64.7% of active LN patients in the study achieving an objective response rate, as measured by a 50% or greater reduction in urine protein to creatinine ratio (UPCR) from baseline at six months. Moreover, 35.2% of patients achieved a complete response rate (CRR) with a UPCR of 0.5 or less. Zetomipzomib continues to demonstrate favorable safety and tolerability profile for administration over the six-month treatment period.   The company plans to continue developing zetomipzomib for patients with lupus nephritis and evaluate development opportunities for systemic lupus erythematosus.

Sutro Gains on Collaboration:  Shares of Sutro Biopharma, Inc. (STRO - Free Report) soared after the company announced a worldwide strategic collaboration and licensing agreement focused on the discovery and development of novel immunostimulatory antibody-drug conjugates (iADCs) with Astellas Pharma Inc.  Both the companies will leverage the unique cancer-fighting potential of iADCs as a novel modality, enabled by Sutro’s ability to engineer complex conjugated antibodies and Astellas’ global oncology R&D expertise.

Per the terms, Sutro will receive an upfront cash payment of $90 million to develop iADCs for three biological targets. It may be eligible to receive up to an additional $422.5 million in milestone payments for each product candidate and tiered royalties ranging from low double-digit to mid-teens on worldwide sales of any commercial products that may result from the collaboration.

Further, Sutro gets the option to share the costs and profits for developing and commercializing product candidates in the United States. Both the companies will share the costs of such co-development and co-commercialization equally if Sutro exercises this option for a particular product candidate. The resulting profits/losses from co-commercialization will also be shared equally in the United States.

Updates From Gilead:  Gilead Sciences, Inc. (GILD - Free Report) announced that the European Commission (“EC”) has approved its CAR T-cell therapy Yescarta (axicabtagene ciloleucel) for a third indication. Yescarta has been approved for treating adult patients with relapsed or refractory FL after three or more lines of systemic therapy.

Gilead also resubmitted its new drug application (NDA) to the FDA for experimental candidate lenacapavir. The company is seeking approval of lenacapavir, an investigational, long-acting HIV-1 capsid inhibitor, for the treatment of HIV-1 infection in heavily treatment-experienced (HTE) people with multi-drug resistant (MDR) HIV-1 infection. The resubmission comes in response to the complete response letter (CRL) issued by the agency in February 2022.  The CRL cited Chemistry Manufacturing and Controls (CMC) issues relating to the compatibility of lenacapavir in borosilicate vials.  Earlier, the Committee for Medicinal Products for Human Use of the European Medicines Agency adopted a positive opinion for pipeline candidate lenacapavir. Gilead is seeking EC’s approval of the candidate for the treatment of HIV-1, in combination with other antiretroviral(s), in adults with multi-drug resistant HIV-1 infection for whom it is otherwise not possible to construct a suppressive antiviral regimen.

The Nasdaq Biotechnology Index has gained 4.43% in the past four trading sessions. Among the biotech giants, Moderna has gained 9.39% during the period. Over the past six months, shares of Moderna have lost 41.03%. (See the last biotech stock roundup here: Biotech Stock Roundup: MRNA’s Jab Update, ACER Down on Regulatory News & More) 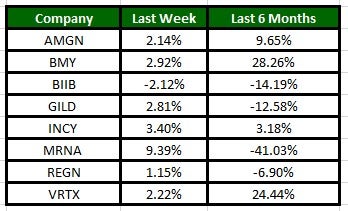