The initial plans for the partnership include constructing and operating a biocarbon production site to supply Steel Dynamics' electric arc furnace steel mills with a renewable alternative to fossil fuel carbon utilizing Aymium's patented technology. The initial facility's production capacity is projected to be more than 160,000 metric tons annually, for an estimated capital investment of $125-$150 million. The facility is expected to commence operations in late 2023.

Steel Dynamics stated that it believes this strategic JV will considerably reduce its steelmaking greenhouse gas emissions, which are already materially lower than global competitors, in a cost-effective manner. It also believes Aymium's process can provide a renewable fossil fuel carbon alternative for Iron Dynamics, its proprietary ironmaking operations.

This investment marks a major step forward on STLD’s path to carbon neutrality, and its continued commitment to lower environmental footprint, the company noted.

Shares of Steel Dynamics have gained 13% in the past year against a 19% decline of the industry. 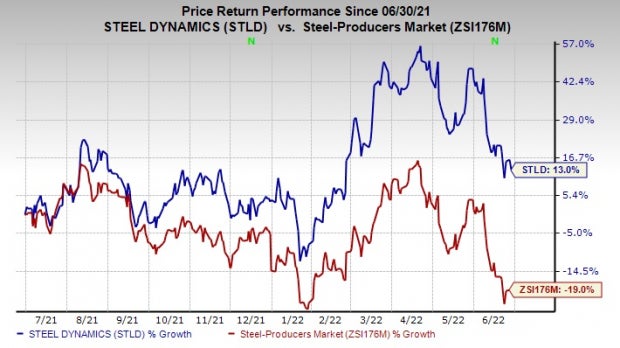 Steel Dynamics sees record earnings for second-quarter 2022 in the range of $6.33-$6.37 per share. The company’s guidance for adjusted earnings is pegged in the range of $6.61-$6.65 per share, barring the impact from costs related to the startup of its Sinton Texas Flat Roll Steel Mill growth investment of roughly $76 million or 28 cents per share.

The company expects second-quarter profitability from its steel operations to be historically strong but lower than first-quarter 2022 levels. The downside will likely be caused by lower earnings from the company's flat roll steel operations, as average flat roll pricing is expected to offset projected higher shipments.

Allegheny’s earnings beat the Zacks Consensus Estimate in the last four quarters. It has a trailing four-quarter earnings surprise of roughly 128.9%, on average. ATI has gained around 10.8% in a year and currently sports a Zacks Rank #1 (Strong Buy). You can see the complete list of today’s Zacks #1 Rank stocks here.

Cabot’s earnings beat the Zacks Consensus Estimate in each of the trailing four quarters, the average being 16.2%. CBT has gained around 13.9% over a year.

Nutrien’s earnings beat the Zacks Consensus Estimate in three of the trailing four quarters, the average being 5.8%. NTR has gained 39.6% in a year. The company flaunts a Zacks Rank #1.