Great Panther Mining Limited (GPL - Free Report) recently announced that it has entered into an agreement with Guanajuato Silver Company Ltd. to sell 100% of its subsidiary Minera Mexicana El Rosario S.A. de C.V. ("MMR"), which comprises the Guanajuato Mine Complex, the Topia mine, and the El Horcón and Santa Rosa projects in Mexico. This is a strategic transaction for GPL as it marks an important step toward becoming a gold company focused on maximizing the potential of the Tucano Gold Mine. By divesting its assets in Mexico, the company intends to pursue growth opportunities in Brazil.

The sale of the silver mines in Mexico will enable Great Panther to focus on maximizing the full potential of the Tucano Gold Mine in Brazil. According to the company, the mine has the greatest value creation potential for its stakeholders. GPL intends to continue investing in unlocking value from both the underground as well as the regional potential of the district. The company’s long-term objective is to expand further in Brazil, and divesting the Mexican silver assets will help it achieve these goals.

Per the agreement, Guanajuato Silver will purchase MMR for a total upfront consideration of $14.7 million and up to $2 million in additional payments.

Last month, Great Panther reported an adjusted loss per share of 2 cents in first-quarter 2022 against earnings of 1 cent per share in the year-ago quarter. Lower metal sales volumes due to decreased production, offset partially by higher realized prices for gold, lead and zinc, led to the loss.

Great Panther produced 17,913 gold-equivalent ounces in the first quarter of 2022, 41% lower than the year-ago quarter due to lesser output at the Tucano mine in Brazil and the Topia mine in Mexico. The figure included 14,319 ounces of gold and 173,698 silver ounces. 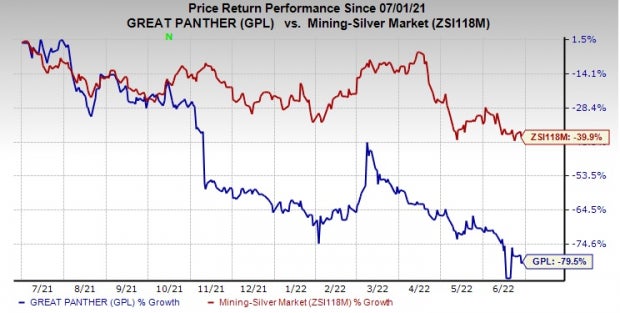 The company’s shares have plunged 79.5% in a year compared with the industry’s decline of 39.9%.

Allegheny has a projected earnings growth rate of 869.2% for the current year. The Zacks Consensus Estimate for ATI's current-year earnings has been revised 27.3% upward in the past 60 days.

Allegheny has a trailing four-quarter earnings surprise of 128.9%, on average. ATI has gained 6% in a year.

Nutrien has a projected earnings growth rate of 163.2% for the current year. The Zacks Consensus Estimate for NTR’s current-year earnings has been revised 27.5% upward in the past 60 days.

Nutrien has a trailing four-quarter earnings surprise of 5.8%, on average. NTR has surged 34% in a year.

Albemarle has a projected earnings growth rate of 203.7% for the current year. The Zacks Consensus Estimate for ALB’s current-year earnings has been revised 100.4% upward in the past 60 days.

Albemarle has a trailing four-quarter earnings surprise of 22.5%, on average. ALB has appreciated 23% in a year.