Hasbro (HAS) Partners With NBA & NBPA to Relaunch Starting Lineup

The Starting Lineup collectibles will have an exclusive, officially licensed Panini NBA trading card. Eric Nyman, president and COO of Hasbro, said, “The NBA and NBPA are tremendous partners for the return of the Starting Lineup brand, and we cannot wait for fans to experience some of the biggest names in the league as action figures.”

The Starting Lineup will have NBA superstars as part of its first wave of figures. It can be pre-ordered starting Sep 22, exclusively on Hasbro Pulse and Fanatics.com and official league stores.

Hasbro continues to focus on devising plans to deliver a robust lineup of entertainment and innovation from E1 and its partners. On the content side, E1 production is gradually recovering through a new animated series on Netflix and Alien TV. The team has been witnessing solid feedback with respect to content like Peppa Pig, PJ Mask and the My Little Pony feature film.

For 2022, the company estimates cash spend on content across scripted and unscripted live-action, animated TV, and film in the range of $725 million to $825 million. It emphasized feature films such as Transformers: Rise of the Beasts and Dungeons & Dragons to be a driving factor in boosting revenues and operating profits in 2023. Meanwhile, the eOne team continues to develop and move into production of Hasbro IP of more than 200 projects in development across TV, film, and animation.

Coming to the price performance, shares of Hasbro have fallen 13.9% in the past year compared with the industry’s decline of 16.4%. The stock carries a Zacks Rank #3 (Hold). 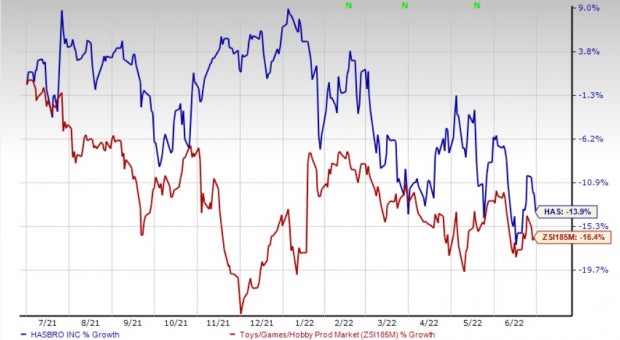 Bluegreen Vacations sports a Zacks Rank #1. BVH has a trailing four-quarter earnings surprise of 85.9%, on average. The stock has increased 44% in the past year. You can see the complete list of today’s Zacks #1 Rank (Strong Buy) stocks here.

The Zacks Consensus Estimate for BVH’s current financial year sales and earnings per share (EPS) indicates growth of 11.2% and 35.1%, respectively, from the year-ago period’s reported levels.

Civeo sports a Zacks Rank #1. The company has a trailing four-quarter earnings surprise of 1,565.1%, on average. Shares of the company have increased 52.7% in the past year.

The Zacks Consensus Estimate for CVEO’s 2022 sales and EPS suggests growth of 12.5% and 1,450%, respectively, from the year-ago period’s levels.

Boyd Gaming carries a Zacks Rank #2 (Buy). BYD has a trailing four-quarter earnings surprise of 24.2%, on average. Shares of the company have declined 15.7% in the past year.