Axsome (AXSM) Hurt by Regulatory Setbacks: Will It Recover?

Axsome Therapeutics (AXSM - Free Report) is currently focused on commercialization of its lead pipeline candidate — AXS-05. A potential approval from the FDA is anticipated shortly.

The company has four candidates in its CNS pipeline — AXS-05, AXS-07, AXS-12 and AXS-14. The company is developing AXS-05 for treating multiple indications, including major depressive disorder (MDD), treatment-resistant depression (TRD) and agitation associated with Alzheimer's disease (AD). It is developing AXS-07 as an acute treatment for migraine. These two candidates are the leading ones in the company’s pipeline.

However, Axsome has faced a few regulatory setbacks related to both AXS-05 and AXS-07 in the past few quarters that hurt its share price. However, recent developments have attracted investors to this biotech stock with the potential for upward movement in the coming months.

Shares of Axsome have declined 3.3% so far this year compared with the industry’s decrease of 23.4%. The company’s shares have shown some recovery during June. 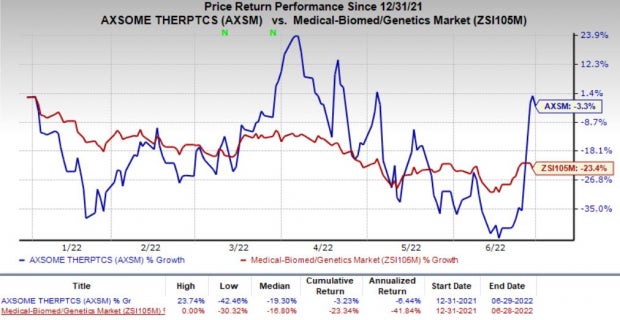 Axsome had filed two new drug applications (NDAs) seeking approval for AXS-05 as a treatment for MDD patients and AXS-07 for migraine patients in 2021.

A potential decision related to the NDA for AXS-05 was expected in August last year. However, the FDA extended the review period for the NDA in the same month, following the identification of deficiencies within the NDA that preclude labeling discussions. AXSM submitted its response to the FDA during the first quarter of 2022. In 2021, the company faced another setback when the FDA rescinded its Breakthrough Therapy designation for its cataplexy candidate, AXS-12. The company’s NDA for AXS-07 was issued a complete response letter (CRL) in April, seeking additional data.

Following a decline in share price for the major part of 2021, the stock prices have stabilized amid promising progress with AXS-05 NDA. During the second quarter, Axsome received two positive regulatory updates from the FDA that led to positive investor sentiment.

Earlier this week, Axsome received proposed labeling from the FDA for AXS-05 as a potential treatment for MDD. In April, the company received post-marketing requirements/commitments proposed by the FDA related to the NDA for AXS-05. The company has already agreed to the FDA’s proposal.

The labeling proposal for AXS-05 from the FDA following the post-marketing requirements/commitments proposal indicates that the potential approval of the candidate may happen shortly. The company has been actively engaged in preparing for the commercial launch of AXS-05 targeting MDD patients in the past few months regardless of the extension of the review timeline of the NDA.

Is a Recovery in Sight?

A potential approval to AXS-05 will boost the prospects of Axsome as there is a significant opportunity for growth in the MDD patient population. The company stated that it has enough resources to fund its operations into 2024. Successful commercialization may boost the company’s top line significantly over the next two years.

The company is also progressing well with the development of AXS-05 in additional indications. The candidate is in late-stage studies for treating agitation associated with AD. A potential approval following the successful completion of clinical studies will boost sales of AXS-05.

The revenue growth will also be driven by the sleep drug, Sunosi, acquired from Jazz Pharmaceuticals (JAZZ - Free Report) in June. Jazz received approval for Sunosi in 2019 as a treatment for narcolepsy. The drug has shown strong sales growth since its launch, which is expected to continue over the next few years. The addition of a commercialized drug with robust demand bodes well for Axsome.

Although a CRL was issued for AXS-07 NDA, Axsome believes that the FDA’s queries can be resolved. A potential approval to this candidate will bring additional revenues. The candidate targets an attractive patient population with a few effective treatments. However, the uncertainty related to the timeline for a re-submission of the NDA and subsequently a potential approval remains a concern.

Other pipeline candidates also represent a growth opportunity for Axsome in the upcoming years.

Based on these fundamental factors, Axsome reflects strong growth potential in the next couple of years. However, any developmental, regulatory or commercial setback will likely hamper growth prospects.

Earnings of Rani Therapeutics beat estimates in each of the last four quarters, the average being 51.76%.

The Zacks Consensus Estimate for Sesen Bio’s 2022 loss has narrowed from 46 cents to 44 cents per share in the past 60 days. Shares of SESN have declined 2.3% in the year-to-date period.

Here's Why You Should Retain Integer Holdings (ITGR) Stock Now