Net sales rose 17% to $2,363.2 million and surpassed the Zacks Consensus Estimate of $2,188 million. Sales benefited from robust growth in the beer business as well as improved sales in the wine and spirits business.

The company’s beer business reported sales growth of 21% to $1,898.2 million, including a 17.3% increase in shipment volumes and 8.7% depletion growth. Sales growth for the segment was driven by robust consumer demand for its iconic brands. Depletion volume benefited from the continued robust performance of Modelo Especial and resilient growth in Corona Extra.

Depletion volume increased more than 15% for Modelo Especial and more than 4% for Corona Extra. Modelo Especial continued to be the No. 1 beer brand in the high-end category, strengthening its leadership position. It was also the largest share gainer in dollar sales in the U.S. beer category in IRI channels. Meanwhile, Corona Extra was the second-leading import share gainer and ranked the third brand in the high-end IRI channels.

Shares of this Zacks Rank #3 (Hold) company have risen 5.8% in the past three months against the industry’s growth of 4.5%. 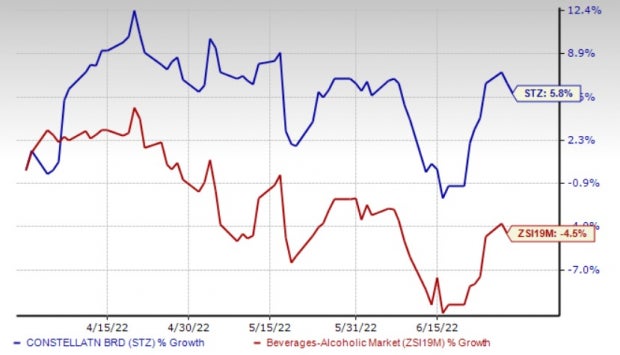 The operating margin in the beer segment contracted 260 bps to 40.2% due to higher cost of goods sold (“COGS”), stemming from increased raw material, transportation, brewery and depreciation costs. This was partly offset by favorable pricing, positive foreign currency impacts, and reduced marketing and SG&A expense rate.

The wine and spirits segment’s operating margin contracted 330 bps to 19.6%, owing to a planned increase in marketing spend, higher SG&A expenses, and higher COGS stemming from elevated raw material and transportation costs. This was partly offset by gains from favorable pricing and mix.

On Jun 29, 2022, the company announced a quarterly dividend of 80 cents per share for Class A stock and 72 cents for Class B stock. The dividend is payable on Aug 24 to its shareholders of record as of Aug 10.

Following the first-quarter fiscal 2023 results, Constellation Brands updated its fiscal 2023 view. The company expects comparable earnings of $11.20-$11.50 on a comparable basis (excluding canopy growth impacts). The company expects earnings of $10.50-$10.80 per share on a reported basis compared with the $11.15-$11.45 mentioned earlier. These suggest improvements from comparable earnings (excluding canopy growth impacts) of $10.99 and a reported loss of 22 cents in the prior year.

The company outlined plans for incremental capacity expansion in Mexico to support growth in its high-end Mexican beer portfolio. It anticipates a total capital expenditure of $5-$5.5 billion for the beer business between fiscal 2023 and 2026. The latest expansion will support an additional capacity of 30 million hectoliters of modular capacity and includes the construction of a brewery in Southeast Mexico in Veracruz. It also targets continued expansion and the optimization of the existing Nava and Obregon breweries.

Archer Daniels, the Delaware, IL-based leading producer of food and beverage ingredients and goods made from various agricultural products, presently sports a Zacks Rank #1 (Strong Buy). The ADM stock has declined 14.4% in the past three months.

The Zacks Consensus Estimate for Archer Daniels’ sales and EPS for the current financial year suggests growth of 12.3% and 22%, respectively, from the year-ago reported levels. The consensus mark for earnings has moved up 3.3% in the past 30 days. ADM has a trailing four-quarter earnings surprise of 22.3%, on average. It has an expected long-term earnings growth rate of 6.4%.

Fomento Economico Mexicano, alias FEMSA, has exposure in various industries, including beverage, beer and retail, which gives it an edge over its competitors. It presently has a Zacks Rank of 2 (Buy). FEMSA has a trailing four-quarter earnings surprise of 3.9%, on average. Shares of FMX have declined 18.6% in the past three months.

Coca-Cola currently has a Zacks Rank #2. The company has an expected long-term earnings growth rate of 7%. Shares of KO have risen 1.2% in the past three months.

The Zacks Consensus Estimate for Coca-Cola’s current financial year’s earnings per share has been unchanged in the past 30 days. The Zacks Consensus Estimate for KO’s sales and EPS for the current financial year suggests growth of 8.9% and 6.5%, respectively, from the year-ago reported levels. KO has a trailing four-quarter earnings surprise of 13.6%, on average.