Shares of Bed Bath & Beyond Inc. (BBBY - Free Report) plunged 23.6% at the close of the trading session on Jun 29, following the drab first-quarter fiscal 2022 results. Both top and bottom lines not only missed the Zacks Consensus Estimate but also declined year over year.

Results were affected by the ongoing macro-economic environment, the shift in customer preference, rising inflation, supply-chain challenges, and significant dislocation in sales and inventory.

In a bid to address the headwinds, management announced significant changes in senior leadership. In doing so, the company named Sue Gove, an independent director of its board and chair of the board's strategy committee, as its interim chief executive officer. The move comes after the exit of the earlier president and chief executive officer, Mark Tritton.

Earlier, under Tritton’s leadership, the company undertook a transformation strategy to stay afloat. As part of it, BBBY divested its non-core assets, invested in technology, infrastructure and digital capabilities, and launched Owned Brands.

Consequently, shares of BBBY have plunged 77.9% in the past three months compared with the industry’s decline of 19.7%. 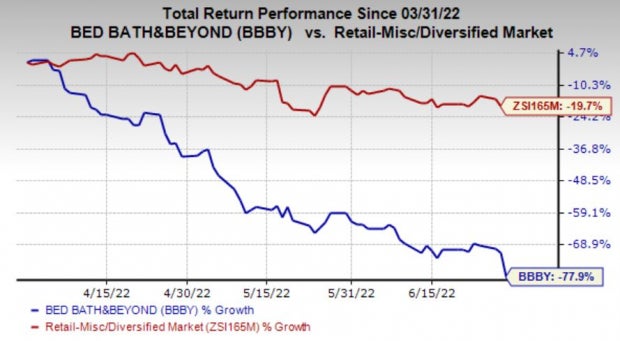 Currently, it is adjusting its supply-chain infrastructure and cost structure to reflect lower sales. Also, the company halted its new store and remodel programs for the rest of fiscal 2022.

In another development, the company remains on track with evaluating options for the potential sale of buybuy BABY. It has been able to identify certain strategies to increase the synergies and growth potential of the brand.

Bed Bath & Beyond reported an adjusted loss of $2.83 per share in the fiscal first quarter against earnings of 5 cents in the year-ago quarter. The figure was also wider than the Zacks Consensus Estimate of a loss of $1.33.

Net sales of $1,463 million declined 25% year over year and missed the Zacks Consensus Estimate of $1,514 million. This might be due to muted demand for household goods and a challenging macroeconomic environment.

Comparable sales (comps) fell 23% year over year. For stores, comps declined 24% year over year, while the same dropped 21% across the digital channel.

The adjusted gross profit slumped 48.9% to $348.1 million in the fiscal first quarter. However, the adjusted gross margin contracted 1110 basis points (bps) to 23.8%, including transient costs related to the 620-bps unfavorable impact of markdown inventory reserves and the 220-bps negative impact of supply chain-related port fees.

Excluding the transient costs, the metric came in at 32.2%.  However, the company has been working with suppliers and accelerating markdowns to right-size inventory levels.

SG&A expenses slumped 3.2% to $637.5 million in the reported quarter, driven by reduced costs stemming from lower rent and occupancy expenses. Adjusted SG&A expenses, as a percentage of sales, expanded 990 bps year over year to 43.6% due to lower sales.

Adjusted EBITDA was negative $224 million against $86.1 million reported in the year-ago period. The decline was mainly due to sluggish sales and dismal margins. The adjusted EBITDA margin contracted 1090 bps year over year to 15.3%.

In the reported quarter, the company opened five buybuy BABY stores, while shutting down two Bed Bath & Beyond stores and one Harmon store.

As of May 28, 2022, the company had 955 stores in operation, comprising 769 namesake stores across 50 states, the District of Columbia, Puerto Rico and Canada; 135 buybuy BABY stores; and 51 stores under Harmon, Harmon Face Values or Face Values names. Additionally, the company’s joint venture operates 12 flagship stores in Mexico.

Management issued a fiscal 2022 view. The company expects comparable sales in the second half of fiscal 2022 to improve on a sequential basis, driven by inventory optimization plans, including incremental clearance activity. Adjusted SG&A expenses are predicted to decline year over year on aggressive cost-cutting actions.

Canada Goose is the designer, manufacturer, distributor and retailer of premium outerwear for men, women and children. It currently carries a Zacks Rank #2. GOOS has a trailing four-quarter earnings surprise of 65.9%, on average.

Why Endo (ENDP) Stock Wilted After its Surge on Tuesday?