In an effort to support its customers, Fulton Financial Corporation (FULT - Free Report) announced modifications to its overdraft program and fee schedule. FULT’s subsidiary, Fulton Bank, has announced that it would eliminate non-sufficient funds (NSF) and extended overdraft fees for its consumer customers in fourth-quarter 2022.

Andy Fiol, the head of Consumer Banking at Fulton Bank, said, “We’ve received consumer customer feedback and this is another way we’re responding and helping. This is just one of several changes we’ve made or are making to meet customers’ needs and expectations regarding overdraft fees.”

Notably, NSF fee is a charge imposed on customers when their checks bounce or when automated withdrawals lead to an overdraft in their accounts. Customers generally do not have funds to cover a transaction or purchase. Hence, the removal of such fees elevates customers’ financial strength.

In order to meet customer needs, FULT has continuously been adapting its products and services. In 2021, Fulton Bank launched “Xpress Account,” which is a checkless account that offers consumer customers many of the benefits of a checking account without overdraft or NSF fees, with a low monthly maintenance charge.

The Xpress Account is certified under the BankOn National Account Standards, which are designed to encourage financial institutions to provide consumers with access to safe and affordable checking accounts.

Fiol added, “We will continue to evaluate our consumer products, services and fee schedule to ensure we are providing industry-leading services to our consumer customers while, at the same time, continuing to change lives for the better.”

So far this year, shares of FULT have lost 13.3% compared with the 17.5% decline of the industry. 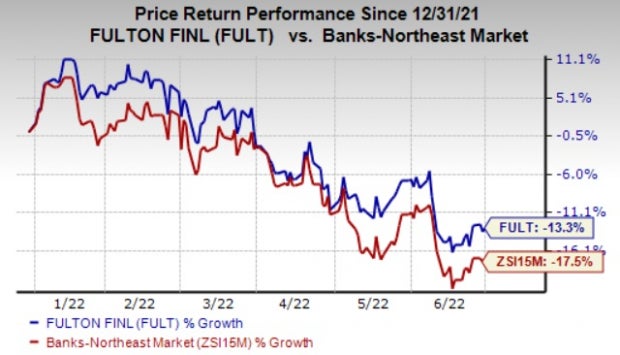 Recently, banks have been facing increased scrutiny from regulators and lawmakers for charging overdraft and other fees from consumers. Several U.S. consumer banks have been asked to eliminate all consumer overdraft fees to safeguard customers. Fulton Financial’s actions align with such requests and bode well for the company in the long run.

In January, Bank of America announced changes to its overdraft services, including plans to do away with NSF fees, effective February, and lower overdraft fees to $10 from $35, beginning in May. The company also removed transfer fees associated with its Balance Connect for overdraft protection service in May.

Since 2010, BAC has taken several steps to “empower its consumer and small business clients to bank with greater confidence and reduce overdraft usage.” These efforts have substantially lowered fees related to overdrafts. Such steps, beside SafeBalance accounts with no overdraft fees and Balance Assist, will reduce overdraft fee revenues by 97% from 2009 levels.

In February, Citigroup announced that it would completely terminate overdraft fees, return item fees and overdraft protection fees by this summer, making it the largest U.S. lender to do so.

Citigroup’s overdraft fee collection has been among the lowest compared with its peers. Other than a consumer-friendly overdraft policy, the banking giant continues to expand access to banking products and services, making banking more financially inclusive for the underserved communities.

3 Reasons to Add Encore Capital (ECPG) Stock to Your Portfolio