BioPhero has established a highly efficient yeast fermentation process for producing pheromones at considerably lower costs and with fewer production steps than competitors' traditional chemical synthesis methods. The lower costs expand the pheromone addressable market from the current focus on specialty fruit and vegetables to now include the large row crop market.

FMC projects pheromones and pheromone-based products to contribute roughly $1 billion in revenues at above company-average EBITDA margin by 2030. The acquisition is expected to complete at the end of the third quarter of 2022 and the purchase price of around $200 million will be paid at closing.

FMC stated that this acquisition demonstrates its continuing commitment to investing in biologicals and adjacent technologies, expanding its world-class portfolio while advancing sustainable agriculture.

Shares of FMC Corp have declined 1.4% in the past year compared with a 14.4% fall of the industry. 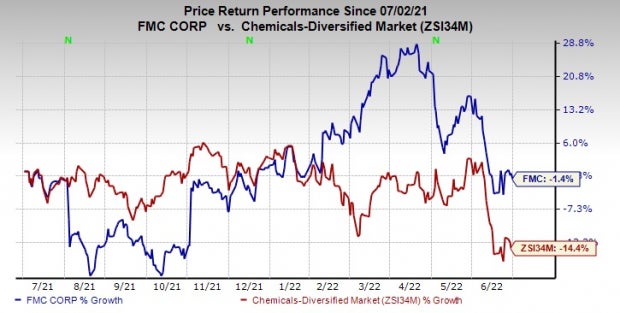 FMC, in its last earnings call, stated that it continues to expect revenues between $5.25 billion and $5.55 billion for 2022, indicating a rise of 7% at the midpoint from 2021 levels. Sales are expected to be driven by higher volumes and prices in all regions.

For second-quarter 2022, revenues are projected in the band of $1.31-$1.39 billion, reflecting an increase of 9% at the midpoint compared with the prior-year quarter’s levels. Adjusted earnings are forecast in the range of $1.70-$2.00 per share, representing an increase of 2% at the midpoint from the prior-year quarter’s levels. It also expects adjusted EBITDA in the range of $330-$370 million for the quarter.

Allegheny’s earnings beat the Zacks Consensus Estimate in the last four quarters. It has a trailing four-quarter earnings surprise of roughly 128.9%, on average. ATI has gained around 8.7% in a year and currently sports a Zacks Rank #1 (Strong Buy). You can see the complete list of today’s Zacks #1 Rank stocks here.

Cabot’s earnings beat the Zacks Consensus Estimate in each of the trailing four quarters, the average being 16.2%. CBT has gained around 10.2% over a year.

Nutrien’s earnings beat the Zacks Consensus Estimate in three of the trailing four quarters, the average being 5.8%. NTR has gained 31% in a year. The company flaunts a Zacks Rank #1.