Lindsay Corporation (LNN - Free Report) delivered adjusted earnings per share of $2.28 in third-quarter fiscal 2022 (ended on May 31, 2022), beating the Zacks Consensus Estimate of $1.57. The bottom line improved 42% year over year.

Lindsay generated revenues of $214 million, up 32% from $162 million reported in the year-ago quarter. The top line surpassed the Zacks Consensus Estimate of $186 million.

Cost of operating revenues increased 29% year on year to $152 million. Gross profit surged 40% to $61.7 million from the year-earlier quarter’s levels. Gross margin came in at 28.8% compared with the year-ago quarter’s 27.2%.

Operating expenses were $26.5 million in the fiscal third quarter, up 17% year over year. Operating income was $35 million, up from the prior-year quarter’s $21 million.

The Irrigation segment revenues rose 35% year over year to around $189 million in the fiscal third quarter. North America irrigation revenues gained 10% from the year-ago quarter’s levels to $96 million, on higher average selling prices, which was partially offset by lower unit sales volume.

While global agriculture market fundamentals remain positive, the ongoing inflationary pressure is weighing on farmer sentiment in the United States. However, the company is witnessing increased activity levels in the international project markets as concerns over food security and global grain supplies have been heightened by the ongoing conflict between Russia and Ukraine.

The increase in road construction activity in the United States is expected to benefit the infrastructure business. Lindsay is likely to complete the delivery of the Road Zipper System project that began in the third quarter and expects to start the delivery of another significant project in the fourth quarter. 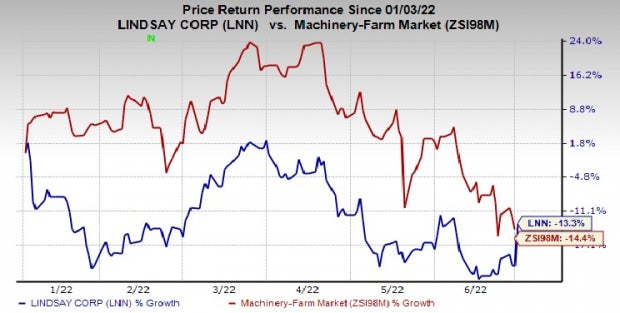 Lindsay’s shares have fallen 13.3% in the past six months compared with the industry’s decline of 14.4%.

Greif has an estimated earnings growth rate of 36% for the current year. In the past 60 days, the Zacks Consensus Estimate for current-year earnings has been revised upward by 17%.

Greif pulled off a trailing four-quarter earnings surprise of 22.9%, on average. The company’s shares have gained 5% in the last six months.
Myers Industries has an expected earnings growth rate of 67% for 2022. The Zacks Consensus Estimate for the current year’s earnings has moved up 15% in the past 60 days.

MYE has a trailing four-quarter earnings surprise of 20.1%, on average. Myers Industries’ shares have increased 25% over the last six months.

Titan International has an estimated earnings growth rate of 112% for the current year. In the past 60 days, the Zacks Consensus Estimate for current-year earnings has been revised upward by 55%.

Titan International pulled off a trailing four-quarter earnings surprise of 56.4%, on average. The company’s shares have surged 37% in six months.

Reasons to Retain CDW Stock in Your Portfolio at the Moment