Shares of Kohl's Corporation (KSS - Free Report) plunged 19.6% on Jul 1 as the company decided to end its strategic review process with Franchise Group, Inc. (FRG - Free Report) after concluding the negotiating period with the same. However, management at Kohl’s is presently reviewing other options to unlock shareholder returns.

Last month, Kohl’s unveiled that its board of directors entered into exclusive negotiations with Franchise Group, a holding company of a collection of market-leading and emerging brands, for the potential sale of the former for $60 per share. Despite solid efforts from both KSS and FRG, the latter decided not to pursue the deal due to the existing retail and financial landscape. Kohl’s stated that given the market volatility and the current scenario, it was not wise to continue with the agreement.

That said, due to its healthy financial status, the company reiterated its commitment to undertaking an accelerated share buyback plan of $500 million after its second-quarter fiscal 2022 earnings release. This forms part of the company’s previously unveiled repurchase authorization of $3 billion.

Kohl’s, which presently carries a Zacks Rank #5 (Strong Sell), is witnessing soft consumer spending patterns due to the increased inflationary pressure. Consequently, management now anticipates net sales in the second quarter to be down in the high single digits compared with the low-single-digit decline projected earlier. 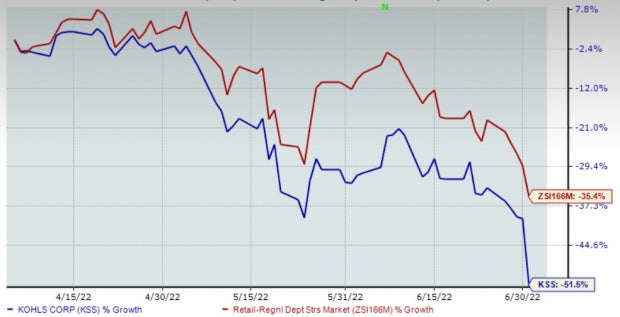 Kohl’s is undertaking core initiatives to scale and boost growth in the years to come. This includes strengthening alliances like Sephora at Kohl’s, which is likely to expand to 850 stores by 2023-end. The company is on track to generate annual omnichannel sales of $2 billion by 2025. Apart from this, KSS intends to open more than 100 smaller-format stores over the next four years, which are expected to drive the annual sales opportunity of more than $500 million.

The company also plans to keep expanding its digital business, with 40% of the digital orders presently fulfilled by stores. Kohl’s is rolling out the Self-Serve Buy Online, Pick Up In-Store facility across all stores in 2022, and it continues to test self-serve returns and check-out, thereby enhancing customers’ experiences.

In the first quarter of fiscal 2022, Kohl's gross margin contracted from 39% to 38.3%, mainly due to escalated freight costs. Further, the company’s SG&A expenses have been rising year over year. In the first quarter, Kohl’s SG&A expenses increased 10.5% to $1,293 million due to investments in the company’s core strategic efforts, such as the support associated with Sephora store opening and refreshes, along with high wages and transportation costs. As a percentage of the total revenues, SG&A expenses expanded 470 basis points (bps) to 34.8%. The company reported an operating income of $82 million, lower than the year-ago quarter’s figure of $273 million.

Management expects SG&A costs to remain high by the mid-to-high single digits in the second quarter and increase in the low single digits for the full year. Apart from this, supply-chain hiccups remain a deterrent. The gross margin is likely to decline 100-125 bps in the full year due to freight and product cost inflation.

Shares of KSS have slumped 51.5% in the past three months compared with the industry’s decline of 35.4%.

Dillard's, which operates retail department stores, sports a Zacks Rank #1 (Strong Buy). The company has a trailing four-quarter earnings surprise of 224.1%, on average. You can see the complete list of today’s Zacks #1 Rank stocks here.

The Zacks Consensus Estimate for Dillard's current financial-year sales suggests growth of 6.1% from the year-ago period. DDS has an expected earnings per share (EPS) growth rate of 14.6% for three to five years.

Dollar Tree, a discount variety retail store operator, sports a Zacks Rank #1. The company has an expected EPS growth rate of 15.5% for three to five years.

The Zacks Consensus Estimate for Dollar Tree’s current financial-year sales suggests growth of 6.7% from the year-ago period. DLTR has a trailing four-quarter earnings surprise of 13.1%, on average.