HSBC Holdings plc (HSBC - Free Report) , which has continuously been making efforts to expand its presence in the growing Asia markets, plans to re-launch its private banking business in India in a year. The news was reported by Reuters.

As part of a group strategy, HSBC exited India’s private banking business in 2015. However, in November 2021, Nuno Matos, the CEO of HSBC’s Wealth and Personal Banking division, said that the bank was exploring whether to re-enter onshore private banking in India.

Since the country is experiencing a surge in the number of super-rich, HSBC has been exploring options of re-entering the market.

Hitendra Dave, the CEO of HSBC India, said, “We can see the amount of wealth creation in India and the growth in the number of millionaires ... so an in-principle decision has been made to re-introduce private banking in India.”

He added, “HSBC has identified India as one of its top strategic market and we have a huge potential for organic growth but we may also look at inorganic growth if an opportunity arises. We are running through the process of internal approvals and it may take anywhere from six to 12 months and will include a full suite of private banking products.”

In sync with the above-mentioned plans, in December 2021, HSBC's indirect wholly-owned subsidiary HSBC Asset Management (India) Private Ltd agreed to acquire L&T Investment Management Limited for $425 million to expand its wealth management business in Asia. Also, this February, the bank acquired 100% of the issued share capital of AXA Insurance in Singapore for $529 million.

Presently, HSBC is catering to the ultra-rich in India from its global hubs in Singapore, London and the Middle East.

HSBC, which already holds a dominant position in the Asia markets, has been aiming to become the region’s top wealth manager by 2025.

In February 2021, the bank announced that it is on an expansion spree and plans to hire 5,000 wealth planners in Asia over the next five years. Along with this, it announced plans of injecting $3.5 billion worth of capital into the region, of which approximately two-thirds will be used to bolster the bank’s distribution competencies via new hires and technology improvements.

Further, HSBC stated plans of shifting capital from the underperforming businesses in Europe and the United States to invest $6 billion in Asia over five years. The capital will mostly cater to amplify its wealth management business since management intends to target wealthy clients in mainland China, Hong Kong, Singapore and other parts of the region.

As part of its efforts to expand its footprint in mainland China, in 2020, HSBC initiated a digital-first, hybrid financial management platform — HSBC Pinnacle — in the region. It hired 200 wealth managers in Shanghai, Hangzhou and Shenzen. In December 2021, it received regulatory approval to acquire the remaining 50% stake in its China life insurance joint venture — HSBC Life Insurance Company Limited. 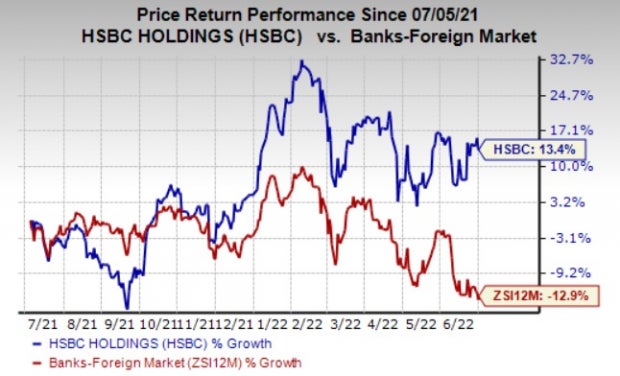 Given that China’s $53-trillion financial market is now open to foreign firms, following the removal of ownership restrictions in 2018, several global banks have been rushing to capitalize on the lucrative prospect. The country has become the second-largest equity market globally. It is also one of the broadest and deepest growth markets outside the United States.

Notably, JPMorgan and Goldman Sachs received approvals to own 100% of their onshore securities joint ventures in August and October 2021, respectively. Along with HSBC, GS and JPM have plans to expand in the country to diversify revenues, and increase their global footprint and market share.