The combat-proven Stinger missile is a lightweight, self-contained air defense system that can be rapidly deployed by ground troops. Its supersonic speed, agility and highly accurate guidance and control system give the weapon an operational edge against cruise missiles and all classes of aircraft.

The missile has been enjoying strong demand amid the ongoing war between Ukraine and Russia, in which the former used the missile to stop the Russian attacks. Almost 1400 Stinger missiles were sent to Ukraine to defend the country from the Russian assault, which led to a depletion of the stock for the U.S. Army.

Due to its remarkable features that can effectively assist in military operations, the Stinger missile has a strong footprint globally. Moreover, the recent performance of the missile in repelling Russian attacks significantly bolstered its demand from the European countries as well. To this end, Raytheon Technologies may continue to witness a steady inflow of orders involving the Stinger missile. The latest contract win is a testament to that. Such contract wins, in turn, are expected to boost RTX’s missiles and defense business unit revenues in the coming days.

The recent turbulence between Russia and Ukraine has led nations to strengthen their warfare capabilities to deter any warfare-like situation and repel any sudden assault. In this context, the demand for missiles may increase manifold as these have the immense destructive power to support military operations efficiently.

Per a report from Markets and Markets, the global rockets and missile market is anticipated to witness a CAGR of 4.8% during the 2021-2026 period.

Considering the expanding size of the market, here are a few defense behemoths that stand to benefit from the rewarding missile market:

Northrop Grumman has a long-term earnings growth rate of 6.1%. The Zacks Consensus Estimate for NOC’s 2022 sales implies a 2.6% improvement from the 2021 reported figure.

Lockheed Martin’s long-term earnings growth rate is pegged at 5.7%. Shares of LMT have returned 17.9% value to investors in the past year.

General Dynamics boasts a long-term earnings growth rate of 9.8%. The Zacks Consensus Estimate for GD’s 2022 sales implies a 2.7% improvement from the 2021 reported figure.

In the past year, shares of Raytheon Technologies have rallied 11.9% against the industry’s decline of 2.3%. 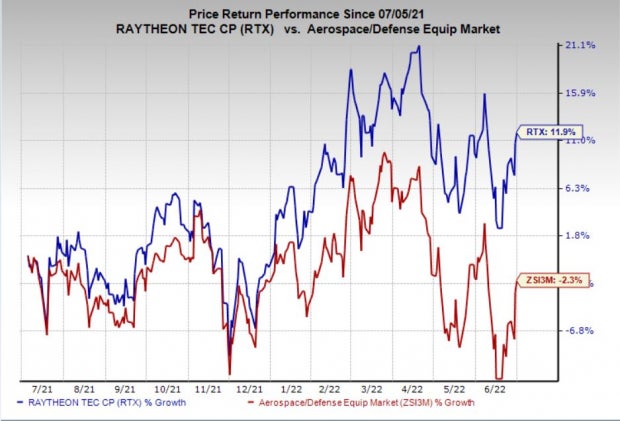