The combined agreements represent 216 megawatts (MW) of renewable energy, which is expected to generate roughly 628,000 megawatt-hours (MWh) of clean power each year. Around 15% of the company’s total scope 1 and 2 greenhouse gas emissions come from its electricity consumption. These agreements will facilitate the company to cut its carbon dioxide emissions by around 225,000 metric tons each year.

The company has signed a PPA with ENGIE North America for 100 MW of renewable electricity sourced from ENGIE's new Limestone wind project in Texas' Navarro and Limestone counties. The project is anticipated to be operational by the end of this year.

The company also signed a PPA with Buckeye Partners for 116 MW of renewable electricity obtained from its Files solar project located in Hill County outside of Dallas, TX. The solar farm is projected to begin operations in the second quarter of 2023.

Shares of LyondellBasell have declined 15.4% in the past year compared with a 15.2% fall of the industry. 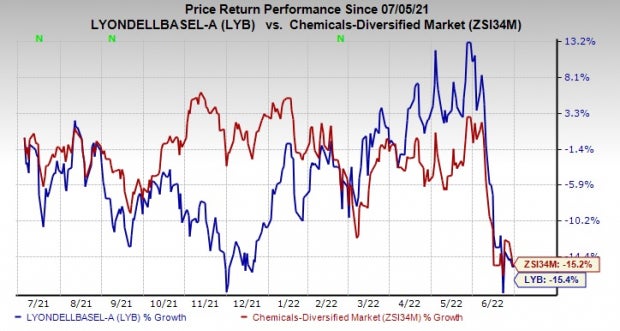 In its last earnings call, the company stated that it expects certain improvements in summer seasonal demand to extend market strength for its products as the global economy continues to navigate geopolitical uncertainty and volatile costs for energy and feedstocks.

Outside China, it projects benefits from sustained demand for consumer packaging, higher volumes for automotive polymer compounds, seasonal demand for durable goods utilized in building and construction markets and strong markets for its oxyfuels products. It anticipates a favorable outlook for its refining segment before exiting the business by the end of 2023.

In the second quarter, LyondellBasell's margins are projected to improve, led by prices for products catching up with increased feedstock and energy costs.

Allegheny’s earnings beat the Zacks Consensus Estimate in the last four quarters. It has a trailing four-quarter earnings surprise of roughly 128.9%, on average. ATI has gained around 6.9% in a year and currently sports a Zacks Rank #1 (Strong Buy). You can see the complete list of today’s Zacks #1 Rank stocks here.

Cabot’s earnings beat the Zacks Consensus Estimate in each of the trailing four quarters, the average being 16.2%. CBT has gained around 11.7% over a year.

Nutrien’s earnings beat the Zacks Consensus Estimate in three of the trailing four quarters, the average being 5.8%. NTR has gained 30.2% in a year. The company flaunts a Zacks Rank #1.