CCXI markets its lead candidate, avacopan, under the name Tavneos in the United States after gaining FDA approval in October 2021.

Tavneos has shown an encouraging uptake since its approval and commercialization. In the last reported quarter, Tavneos generated net product sales of $5.4 million from its commercial sales in the United States.

Other than Tavenos, ChemoCentryx does not have any other products approved for sale as of yet. The company’s high dependence on avacopan for other indications like C3G, an ultra-rare disease of the kidney and Hidradenitis Suppurativa (HS) can be a setback for Chemocentryx.

Shares of ChemoCentryx have plunged 26.5% so far this year compared with the industry’s 21.4% decline. 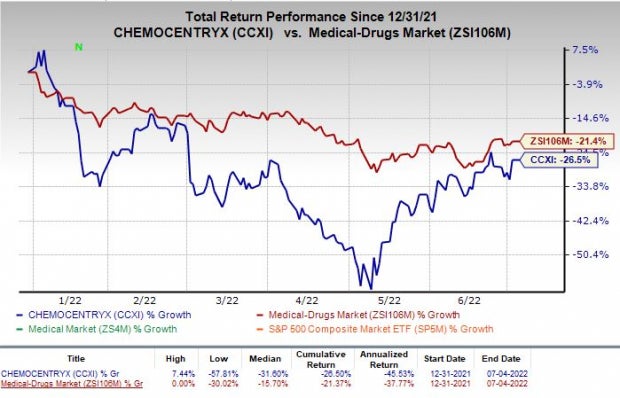 ChemoCentryx initiated a phase I dose-escalation study in the second quarter of 2021, evaluating the effect of CCX559 in patients with advanced solid tumors. While the phase I study results will be made later in the year, the company intends to initiate a phase Ib/II clinical study in the second half of 2022.

However, ChemoCentryx has also suffered its fair share of setbacks. In the second quarter of 2020, CCXI decided to stop the development of CCX140, an inhibitor of the C-C chemokine receptor known as CCR2, for the treatment of a rare renal disorder, primary Focal Segmental Glomerulosclerosis (FSGS). The decision was based on the review of phase II clinical study of the candidate, which did not demonstrate a meaningful reaction in the control group, even after 12 weeks of blinded treatment. Such setbacks do not bode well for the stock.