In a bid to expand its presence in the West Coast, Hilton Worldwide Holdings Inc. (HLT - Free Report) recently announced the opening of its luxury hotel - Conrad Los Angeles, in California. This marks the first Conrad Hotels & Resorts property in the region. Earlier, the company expanded the brand’s footprint with openings in Las Vegas, Tulum, Sardinia and Nashville.

Located at The Grand LA (in downtown Los Angeles), the 305-room luxury hotel will have amenities like spas, swimming pools, culinary venues and a rooftop terrace. Moreover, the hotel is covered by Hilton's guest-loyalty program —  Hilton Honors — offering members flexible payment options, access to member rates, the ability to earn and redeem points and other exclusive benefits.

Concerning the opening, Danny Hughes, executive vice president and president, Americas, Hilton, stated, " This is a monumental occasion as we open the doors to this incredible property amid downtown Los Angeles' development boom and we are looking forward to offering guests an unrivaled, luxury hospitality experience in this sought-after destination."

Hilton has been consistently trying to expand its presence in the hospitality industry. During first-quarter 2022, Hilton opened 76 new hotels. It also achieved net unit growth of nearly 7,800 rooms. During the quarter, the company expanded its presence in the Asia Pacific region by opening the Hilton Singapore Orchard. Also, it boosted its development pipeline with two international deals under its Curio Collection (by Hilton brand), including the Royal Palm Galapagos (in Ecuador) and the Palacio Bellas Artes San Sebastian (Spain).

The company emphasized the expansion of its luxury portfolio with the signings of the Waldorf Astoria Sydney, the Conrad Austin Hotel & Residences, and Canopy Properties in Cannes and Downtown Nashville. Also, it remains optimistic on the back of new development and conversion opportunities. For 2022, the company expects net unit growth to be nearly 5%.

In the past year, shares of the company have declined 10.9% compared with the industry’s fall of 13.2%. 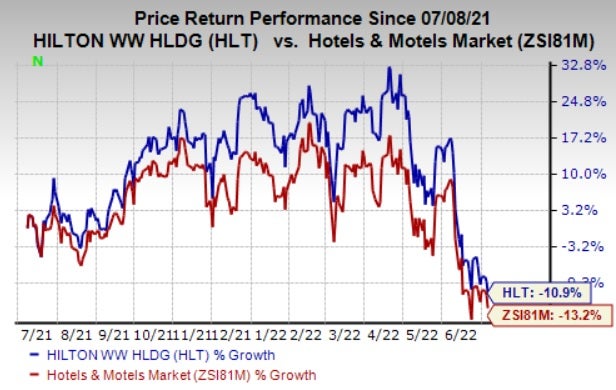 Bluegreen Vacations sports a Zacks Rank #1. BVH has a trailing four-quarter earnings surprise of 85.9%, on average. The stock has increased 47% in the past year.

The Zacks Consensus Estimate for BVH’s current financial year sales and earnings per share (EPS) indicates growth of 11.2% and 35.1%, respectively, from the year-ago period’s reported levels.

Caleres sports a Zacks Rank #1. CAL has a trailing four-quarter earnings surprise of 62.9%, on average. Shares of the company have gained 3.1% in the past year.

The Zacks Consensus Estimate for CAL’s current financial year sales and EPS suggests growth of 4.8% and 0.7%, respectively, from the year-ago period’s levels.

MGM Resorts sports a Zacks Rank #1. MGM has a trailing four-quarter earnings surprise of 212.5%, on average. Shares of the company have declined 26.7% in the past year.

The Zacks Consensus Estimate for MGM’s current financial year sales and EPS suggests growth of 28.1% and 240.3%, respectively, from the year-ago period’s reported levels.

Here's Why You Should Retain Wynn Resorts' (WYNN) Stock