This is the second analysis in which OCA has met its primary endpoint for the intent-to-treat (ITT) population in REGNERATE.

Based on the study’s results, Intercept will resubmit its new drug application (NDA) for OCA to treat liver fibrosis due to NASH.

The company stated that the primary endpoint of the new interim analysis of the ITT population from REGENERATE, which was conducted in 2,247 subjects, — fibrosis improvement without worsening of NASH at 18 months — was achieved with the 25 mg daily dose of OCA.

A greater proportion of patients in OCA treatment arm (taking doses of  25 mg) achieved the primary endpoint of NASH resolution with no worsening of liver fibrosis compared with placebo. However, this did not reach statistical significance.

However, in line with recent FDA guidance, the new interim analysis used a consensus panel approach to histology reads, while the original analysis relied on results from individual central readers.

Shares of Intercept have declined 7% year to date, compared with the industry’s decline of 18.9%. 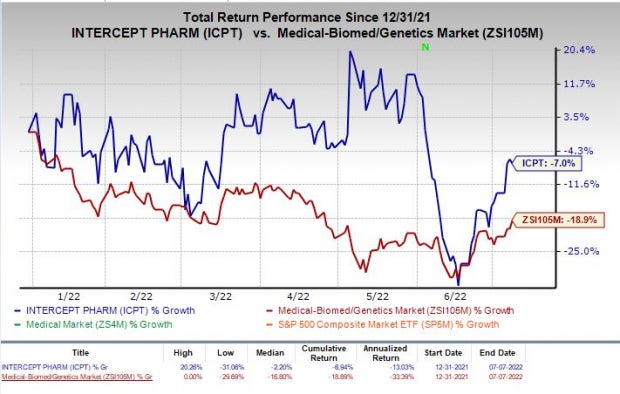 Back in November 2019, Intercept announced that the FDA accepted its NDA for OCA, seeking approval for the treatment of fibrosis due to NASH. The regulatory agency also granted priority review and set an action date of Mar 26, 2020, for the NDA.

The NDA filing for OCA was supported by positive interim analysis results from the pivotal phase III REGENERATE study in patients with liver fibrosis due to NASH, reported by the company in February 2019.

However, Intercept received a complete response letter (CRL) from the FDA in June 2020, stating that NDA for OCA for the treatment of liver fibrosis due to NASH could not be approved in its present form.

Per FDA’s guidance, Intercept decided to resubmit the NDA along with supplemental data to further characterize OCA’s efficacy and safety profile, based on phase III REGENERATE 18-month biopsy data, together with a safety assessment from its ongoing studies.

However, last month, Intercept reported a delay in its pre-submission meeting with the FDA regarding the potential resubmission of its NASH NDA based on an interim analysis of the REGENERATE study in patients with fibrosis due to NASH.

Intercept’s pre-submission meeting with FDA is now set for later this month, where the company will resubmit its NDA for OCA in liver fibrosis due to NASH.