With labor problems hurting the U.S. airline industry, there was an encouraging update from American Airlines’ (AAL - Free Report) CEO Robert Isom. Per the new proposal made to the Allied Pilots Association, the union representing the pilots, pilot pay is likely to be boosted 17% by 2024 end. European carrier Ryanair Holdings (RYAAY - Free Report) also received impressive tidings on the labor front when it reached a pay-related agreement with the British Airline Pilots’ Association (BALPA).

Latin American carrier Gol Linhas’ (GOL - Free Report) June traffic measured in revenue passenger kilometers declined 5.5% from the May reading, reflecting the slowdown in air-travel demand in the country. In the latest update on the takeover saga of Spirit Airlines (SAVE - Free Report) , management delayed its shareholders’ vote on the buyout offer put forward by Frontier Group Holdings (ULCC - Free Report) by a week to Jul 15.

1.Per the proposal put forward by AAL’s CEO, pilots will be eligible for a pay hike of 6% on commencement of the contract followed by 5% raises at the start of 2023 and 2024. Moreover, if the deal gets ratified by Sep 30, 2022, there will be other lucrative incentives like retroactive pay. The new offer is being reviewed by the union. American Airlines currently carries a Zacks Rank #3 (Hold). Updates on labor deals at other U.S.-based carriers were mentioned in the previous week’s writeup.

2. At Ryanair, the labor deal will accelerate pay restoration of pilots and ensure pay hikes post restoration through 2026.  The restoration of pay is necessary as RYAAY intends to expand capacity as much as 115% of the pre-coronavirus levels in the current year itself to meet the demand swell.

Per Ryanair’s people director Darrell Hughes, “While 100% of our pilots across our European network are covered by 2020 Emergency Agreements, we continue to work with our pilots and their unions on new deals, similar to this one concluded with BALPA, and have successfully re-negotiated improved long-term agreements with 70% of our pilots, running until 2026 or 2027 as we prioritize pay restoration.” Naturally, for this capacity expansion, it is imperative to keep RYAAY’s group of pilots satisfied. The pay increments apart, pilots at RYAAY become eligible for other benefits.

3. At Gol Linhas, consolidated capacity (measured in available seat kilometers) expanded 68.6% year over year in June, much higher than the traffic increase of 54%. As a result of capacity expansion outweighing traffic growth, load factor (% of seats filled by passengers) declined 7.2 percentage points to 76.7%. The domestic operations accounted for most of the data as international operations are still minimal.

In the first half of the year, consolidated load factor decreased 2.5 percentage points year over year to 79.3% with capacity expansion (73.2%) outweighing traffic growth (67.9%).

4.  To continue talks with Frontier and another bidder JetBlue Airways (JBLU - Free Report) , Spirit Airlines postponed its shareholders’ vote, which was scheduled for today. Management at SAVE stated that the shareholders of record as of the close of trading on May 6, 2022, are eligible to vote at the special meeting. Both JetBlue and Frontier are aiming to acquire Spirit Airlines to expand their network and take advantage of the continued improvement in air-travel demand. The takeover battle comes at a time when the airline industry is struggling with staffing and aircraft shortages. 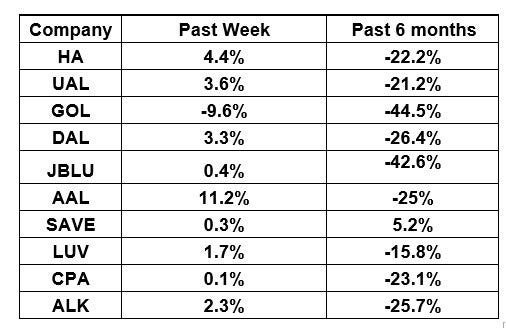 Carpenter Technology (CRS) to Hike Base Prices on New Orders