Monster Beverage Corporation (MNST - Free Report) is trending up the charts, thanks to continued strong demand for energy drinks. The company, which primarily markets and distributes energy drinks and alternative beverages, is a key beneficiary of the recent consumer awareness of health drinks. This led to strength in its energy drink category, particularly the Monster Energy brand. Additionally, product innovation plays a significant role in MNST's success.

Backed by the aforementioned tailwinds, the company reported 11th straight quarter of sales beat for first-quarter 2022. Net sales of $1,518.6 million improved 22.1% year over year. Net sales to customers outside the United States rose 20.4% to $553.4 million, representing about 36% of the total net sales.

The currently Zacks Rank #3 (Hold) stock has gained 0.8% year to date against the industry and the Consumer Staples sector’s decline of 1.7% and 1%, respectively. Additionally, the stock’s share price rise came against the S&P 500’s fall of 20% in the same period.

Driven by the robust quarterly performance, the Zacks Consensus Estimate for Monster Beverage’s 2022 sales and EPS suggests growth of 15.4% and 3.9%, respectively, from the year-ago period’s corresponding reported numbers. 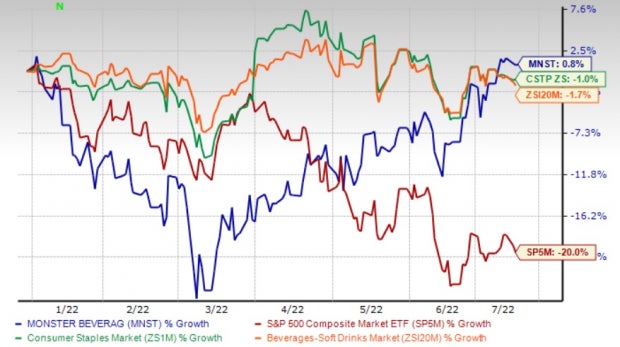 In first-quarter 2022, the Monster Energy Drinks segment's net sales advanced 20% year over year to $1.4 billion. According to Nielsen, sales for the energy drinks category, including energy shots, increased 11.5% year over year for the 13 weeks ended Apr 23, 2022. Sales for MNST's energy brands, including Reign, rose 8.6% in the same 13-week period. Management is optimistic about the strength in the energy drinks category with the Monster Energy brand growing significantly. The product launches across the Monster family will drive MNST's top and the bottom line.

Monster Beverage remains committed to product introductions and innovation to boost growth. The company’s first 16-ounce Ultra Variety 12 packs launched in January have been performing well so far. In February, it unveiled the latest flavors, such as Ultra Peachy Keen, Juice Monster Aussie Style Lemonade, Rehab Watermelon and Reign Reignbow Sherbet. MNST remains on track with the expansion of its multi-pack portfolio. Also, in the same month, in collaboration with Coca-Cola, the company launched its brand True North Pure Energy Seltzer nationwide.

Monster Ultra Gold and Mother Kiwi Sublime were launched in Australia and New Zealand. In the first quarter, Monster Beverage introduced Ultra Fiesta, Watermelon and Gold and Juiced Monarch, Khaotic and Pacific Punch in a number of countries. MNST unveiled Predator and Reign in additional countries as well as the Predator brand in India. It launched Monster Mango Loco in Japan during April 2022. MNST announced plans to launch the Predator brand in several countries, including APAC, during 2022.

Higher freight rates and fuel costs have been hurting Monster Beverage’s gross and operating margins for a while, which persisted in the first quarter as well. The higher freight rates and fuel costs included costs of importing aluminum cans and elevated aluminum can costs due to higher aluminum commodity pricing. Higher ingredient and other input costs resulted from higher secondary packaging materials, increased co-packing fees, production inefficiencies and geographical sales mix. The bottom line was also affected by inflationary operational costs of aluminum cans, shipping, freight and other inputs.

Monster Beverage also continues to face freight inefficiencies, port congestion, and insufficient co-packing capacity and delays. Elevated costs of the import of aluminum cans and aluminum can costs due to higher aluminum commodity pricing induced higher cost of sales in the first quarter. MNST is also witnessing increased costs of ingredients and other input costs, including secondary packaging material, co-packing fees and production inefficiencies, which further weigh on the cost of sales. Elevated distribution expenses continue to impact operating expenses.

Consequently, Monster Beverage is likely to be affected by these bottlenecks despite the pricing actions and product launches.

Sysco, the marketer and distributor of food and related products, currently sports a Zacks Rank #1 (Strong Buy). Shares of SYY have rallied 9.9% year to date. SYY has an expected long-term earnings growth rate of 9%. You can see the complete list of today’s Zacks #1 Rank stocks here.

Duckhorn currently has a Zacks Rank of 1 and an expected long-term earnings growth rate of 12.2%. NAPA has a trailing four-quarter earnings surprise of 94.4%, on average. The stock has declined 20.2% year to date.

The Zacks Consensus Estimate for Duckhorn’s current financial-year sales and earnings per share suggests growth of 10.8% and 6.9%, respectively, from the corresponding year-ago reported numbers. The consensus mark for NAPA’s earnings per share has been stable in the past 30 days.

Fomento Economico Mexicano, alias FEMSA, has exposure in various industries, including beverage, beer and retail, which gives it an edge over its competitors. FMX presently has a Zacks Rank #2 (Buy). FEMSA has a trailing four-quarter earnings surprise of 3.9%, on average. Shares of FMX have declined 22.4% in the year-to-date period.

The Zacks Consensus Estimate for FEMSA’s sales for the current financial year suggests growth of 5.3% from the year-ago period’s reported figure. The consensus mark for earnings per share suggests a fall of 7.1%. The current financial year’s earnings per share have moved down 1.6% in the past 30 days. FMX has an expected EPS growth rate of 8.8% for three to five years.