Dow (DOW) Gears Up for Q2 Earnings: What's in the Offing?

Dow Inc. (DOW - Free Report) is scheduled to come up with second-quarter 2022 results before the opening bell on Jul 21. The company is expected to have benefited from strong demand across a number of end markets, higher prices and its cost and productivity initiatives. However, raw material and energy cost inflation and plant turnaround costs are likely to have affected its performance.

The company surpassed the Zacks Consensus Estimate in each of the trailing four quarters, the average being 9.2%. It posted an earnings surprise of 15.8% in the last reported quarter.

Dow’s shares are down 14.3% over a year compared with 9.3% decline recorded by the industry. 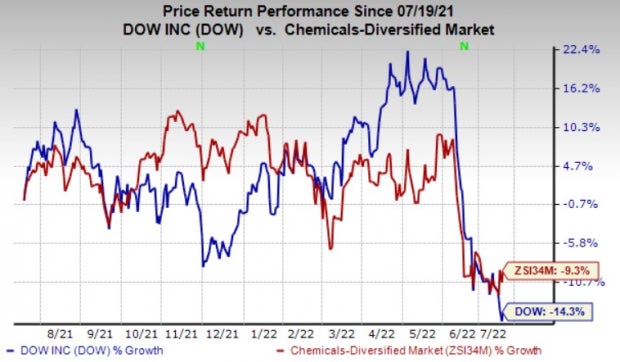 Our proven model predicts an earnings beat for Dow this time around. The combination of a positive Earnings ESP and a Zacks Rank #1 (Strong Buy), 2 (Buy) or 3 (Hold) increases the chances of an earning beat.

Earnings ESP: Earnings ESP for Dow is +0.70%. The Zacks Consensus Estimate for the second quarter is currently pegged at $2.14. You can uncover the best stocks to buy or sell before they’re reported with our Earnings ESP Filter.

The Zacks Consensus Estimate for revenues for Dow is currently pegged at $15,687.1 million, suggesting a rise of 13% year over year.

The company is also expected to have gained from cost synergy savings and productivity actions in the second quarter. It remains focused on maintaining cost and operational discipline. Benefits of its restructuring program are also likely to get reflected on the company’s bottom line in the quarter.

However, the company is expected to have witnessed challenges from higher raw material and energy costs in the second quarter. Raw material and logistical constraints are likely to have persisted in the quarter. Raw material inflation is expected to have affected the company’s Packaging & Specialty Plastics and Industrial Intermediates & Infrastructure segments in the second quarter. The Industrial Intermediates & Infrastructure segment is also likely to have been affected by higher energy costs in Europe.

The company is also likely to have faced headwinds from plant turnaround costs in the second quarter. Dow sees roughly $125 million headwind in the Packaging & Specialty Plastics segment in the second quarter associated with a turnaround at its cracker and aromatics facilities in Louisiana. It also expects around $100 million headwind in the quarter related to turnarounds at its Stade and Terneuzen alkoxylate facilities. Turnaround costs are expected to have impacted margins in the quarter to be reported.

Here are some companies in the basic materials space you may want to consider as our model shows these too have the right combination of elements to post an earnings beat this quarter:

Albemarle Corporation (ALB - Free Report) , scheduled to release earnings on Aug 3, has an Earnings ESP of +17.01% and carries a Zacks Rank #1. You can see the complete list of today’s Zacks #1 Rank stocks here.

The Zacks Consensus Estimate for Albemarle's second-quarter earnings has been revised 10.3% upward over the past 60 days. The consensus estimate for ALB’s earnings for the quarter is currently pegged at $2.80.

Celanese Corporation (CE - Free Report) , scheduled to release earnings on Jul 28, has an Earnings ESP of +1.03% and carries a Zacks Rank #3.

FMC Corporation (FMC - Free Report) , expected to release earnings on Aug 2, has an Earnings ESP of +0.62% and carries a Zacks Rank #3.