Angelman syndrome is caused by the loss of function of the maternally inherited Ubiquitin Protein Ligase E3A (UBE3A) gene.

Per the company, these interim data support a protocol amendment to the above-mentioned phase I/II study, which was approved by the U.K. and Canadian health authorities in May 2022 to begin additional new cohorts of patients at higher monthly loading doses.

Along with the update, Ultragenyx also exercised its option to acquire GeneTx for an upfront payment of $75 million plus future milestone and royalty payments. The company has completed the acquisition.

The acquisition is likely to strengthen Ultragenyx’s broad portfolio of pipeline candidates that are being developed for treating various diseases.

Shares of Ultragenyx have lost 27.4% so far this year compared with the industry’s decline of 20.4%. 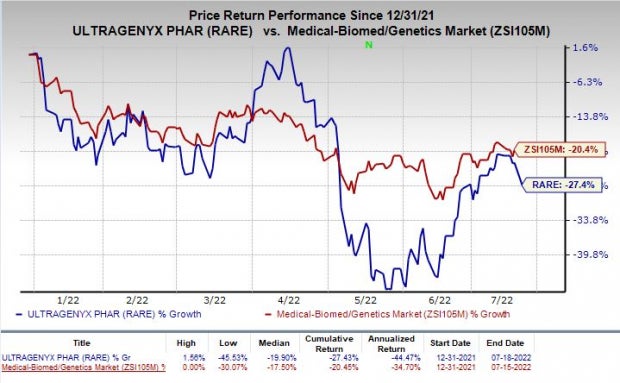 In October 2020, Ultragenyx announced interim data from the phase I/II study on GTX-102 for treating Angelman syndrome. Back then, the company decided to cease enrollment and dosing in the study after all patients experienced a serious adverse event of lower extremity weakness related to local inflammation, following treatment with the highest doses of GTX-102.

In September 2021, the FDA removed the clinical hold from Ultragenyx and GeneTx’s phase I/II study evaluating GTX-102 for the treatment of Angelman syndrome.

In October 2021, Ultragenyx and GeneTx dosed the first patient in a phase I/II study in Canada, evaluating GTX-102 for the treatment of Angelman syndrome.

Earnings of Anika Therapeutics have surpassed estimates in each of the trailing four quarters. ANIK delivered an earnings surprise of 200.45%, on average.

Earnings of Fate Therapeutics have surpassed estimates in two of the trailing four quarters and missed the same on the other two occasions. FATE delivered an earnings surprise of -0.72%, on average.

Earnings of Beam Therapeutics have surpassed estimates in three of the trailing four quarters and missed the same on the other occasion. BEAM delivered an earnings surprise of 1.80%, on average.

IDEX (IEX) to Report Q2 Earnings: What's in the Offing?