Ross Stores Inc. (ROST - Free Report) opened 21 Ross Dress for Less and eight dd's DISCOUNTS stores in 12 states in June and July. The move is in sync with its plans to add 100 stores, including 75 Ross and 25 dd's DISCOUNTS, in fiscal 2022.

With the store openings, the company strengthened its presence in its largest markets of California, Florida, and Texas, as well as added locations like North Carolina for dd's and Ohio for Ross. Management expects to open 2,900 Ross Dress for Less and 700 dd's DISCOUNTS locations in the long run. Currently, it operates 1,980 stores in 40 states, the District of Columbia, and Guam.

Ross Stores has been consistent with the execution of its store-expansion plans over the years. The company’s store-expansion efforts are focused on continually increasing penetration in the existing and new markets. In first-quarter fiscal 2022, it opened 22 Ross stores and eight dd’s DISCOUNTS stores. In the second quarter of fiscal 2022, the company expects to open 29 stores, including 21 Ross and eight dd’s DISCOUNTS stores.

Despite the aforementioned upsides, Ross Stores has been reeling under cost headwinds, inflationary pressures and continued supply-chain issues. This led to higher freight costs and distribution expenses.

The company is also facing headwinds from higher wages, which have been resulting in increased SG&A expenses. In first-quarter fiscal 2022, SG&A expenses, as a percentage of sales, expanded 50 bps year over year due to elevated wages and the deleveraging effect of lower comps. The ongoing cost headwinds related to elevated freight and wages, along with the deleveraging effects of the comps decline, hurt the operating margin in the fiscal first quarter. The operating margin of 10.8% declined 340 bps from 14.2% in first-quarter fiscal 2021.

Driven by these factors, ROST reported dismal first-quarter fiscal 2022 results, wherein the top and bottom lines lagged the Zacks Consensus Estimate and declined year over year. Earnings declined 27.6% year over year on soft sales and same-store sales (comps), as well as a decrease in margins due to the ongoing cost headwinds.

Total sales dropped 4.1% year over year due to the government stimulus and pent-up customer demand in the first half of fiscal 2021. Further, sales were impacted by inflationary pressures on consumers, owing to the Russia-Ukraine conflict.

Sales trends at the dd's DISCOUNTS business were softer than Ross stores, as last year’s significant stimulus benefit led to difficult comparisons. Additionally, dd's DISCOUNTS was hurt by the inflationary pressures weighing on the lower-income household purchases in the reported quarter. Comps declined 7% from first-quarter fiscal 2021, owing to a decline in transactions, which offset the increase in the average basket size.

Consequently, management provided a bleak view for the rest of fiscal 2022. For second-quarter fiscal 2022, the company expects comps to decline 4-6%, whereas it reported 15% growth in the prior-year quarter. Total sales are expected to decline 1-4% in the fiscal second quarter. Earnings per share are envisioned to be between 99 cents and $1.07 per share, whereas it reported $1.39 in second-quarter fiscal 2021.

The company expects the operating margin to be 10.4-10.8% in the fiscal second quarter, suggesting a decline from the prior-year quarter’s reported number. The operating margin is expected to be affected by the negative comp forecast, and elevated freight and wage expenses, which are expected to continue through the first half of fiscal 2022. 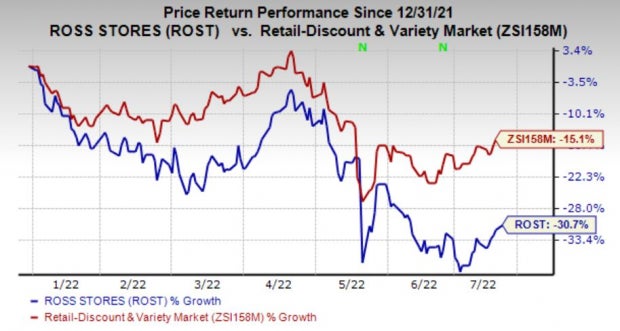 We note that the Zacks Rank #5 (Strong Sell) stock plunged 30.7% year to date compared with the industry’s decline of 15.1%.

Boot Barn, which provides western and work-related footwear, apparel and accessories, currently has a Zacks Rank #2 (Buy). BOOT has a trailing four-quarter earnings surprise of 25.2%, on average. You can see the complete list of today’s Zacks #1 Rank (Strong Buy) stocks here.

Capri Holdings, which provides women’s and men’s accessories, footwear and ready-to-wear, as well as wearable technology, watches, jewelry, eyewear and a full line of fragrance products, currently carries a Zacks Rank #2. CPRI has a trailing four-quarter earnings surprise of 49.3%, on average.

The Zacks Consensus Estimate for Capri Holdings’ current financial-year sales suggests growth of 3.8% from the year-ago period’s reported figure, while the same for EPS indicates a decline of 4.9%. CPRI has an expected EPS growth rate of 11.3% for three-five years.

Is a Beat in Store for Schlumberger (SLB) in Q2 Earnings?